Searching for a pub in Yorkshire is something like looking for a needle in a haystack. Would you believe there were 3,700 pubs in the Yorkshire and Humber region in 2019? [1] 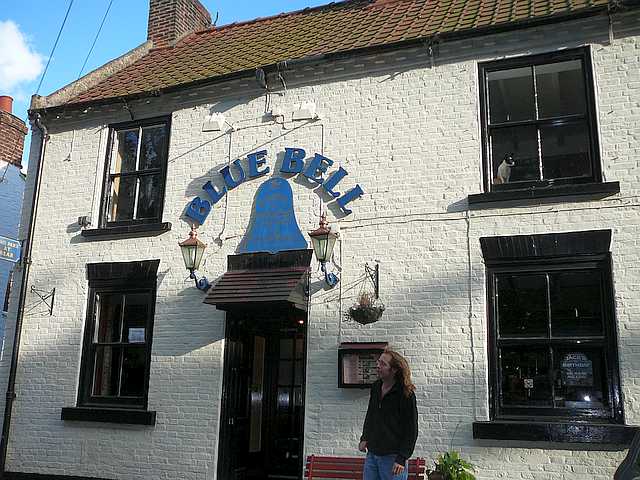 Jason in front of the Blue Bell, Nafferton, where Robert Nicholson was landlord 1851-1853.

At least I had narrowed it down. I knew that I was looking for a pub in the village of Nafferton, in the East Riding, where my great, great grandfather, Robert Nicholson, had been a landlord or publican before he emigrated to Canada with his wife, two sons and two daughters in the early 1850s.

The main clues came from baptismal records for the two girls, the youngest in the family. Elizabeth was baptized on 9 October 1847; Margaret, my great grandmother, on 25 November 1849.  Both records show Robert Nicholson’s occupation as “Innkeeper” in Nafferton without naming the inn.

Old directories list a number of inns in Nafferton. For instance, in 1892, there were five inns: King’s Head, Blue Bell, White Horse, Cross Keys and Star Inn. Not all had survived to the present day. Where to start? 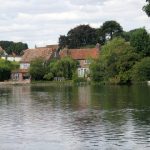 Nafferton homes backing onto the mere.

Luckily, the village is small. Nafferton counted some 2,400 residents the year of my visit.

My first thought was to inquire at the post office. The postmistress had a different idea. “Just go to any one of the pubs, love. There are sure to be people having a pint who’ll be able to help you.”

Good advice. I headed along High Street and on to North Street, and went in to the Cross Keys. Soon I found myself sitting with a group of congenial people, half-pint in hand, explaining my quest.

One young man was especially helpful. “The chap you need to talk to is Cliff Horsman,” said Jason. “He knows the history of all the local pubs inside out. He lives down at the mere.” [2]

Following Jason’s directions, it was easy to find the right house. When Mr. Horsman answered the doorbell, I explained my quest once again. 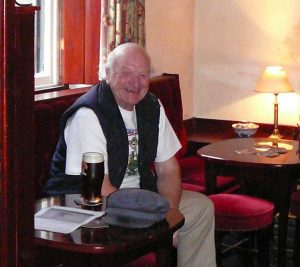 He immediately promised to help me later that day. Would I meet him at the Blue Bell pub at 4 p.m.? He arrived carrying some notes, which we pored over for a good hour or more, chosen brew in hand.

Then, smiling broadly, Cliff leaned over and clapped me on the back. “Aye, lass, this will be the place all right. Tha can be reet chuffed.” (Or something like that, said in his Yorkshire dialect.)

We decided that I should take some photos of the bar. Lucky that we did. Because that was when we spotted the Blue Bell’s “Honour Roll” with its listing of all the landlords/landladies going back to 1750. 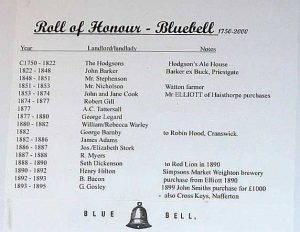 Robert Nicholson’s name is there, fourth on the list, as landlord from 1851 until 1853. Interesting that the landlord for 1848-1851 was a Mr. Stephenson. He was probably a relative of Robert’s wife, Hannah Stephenson. Before that, John Barker was landlord from 1822 until 1848. It is possible that Robert operated the pub under an agreement with Stephenson and Barker. If so, his tenure could easily date from 1847 if not even earlier.

Finding the Blue Bell was a great thrill. I was over the moon. Now I knew that this lovely old pub was where Robert Nicholson had been landlord from at least 1847 until he left for Canada.

With all the hard detective work taken care of, it was time to relax and celebrate the discovery. We sat down and – you guessed it – enjoyed another pint. I ran up quite a tab that day.

My thanks to Cliff Horsman and Jason for all their help in tracking down Robert Nicholson’s connection to the Blue Bell, and to Ian Macdonald for kindly reading this article in draft form.