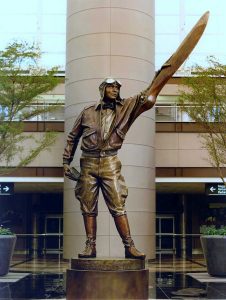 Jeppesen is a name familiar and dear to pilots, who have been using the Jeppesen aviation navigation notes and charts ever since 1934.

My introduction came by a different route – a 2003 article in Art of the West magazine about a monumental statue of Jeppesen by sculptor George Lundeen. Lundeen’s 16-foot cast bronze statue, The Aviator: Portrait of Elrey B. Jeppesen, was donated to the city and county of Denver by the Jeppesen Aviation Foundation in 1994 and stands in the Great Hall at Denver International Airport.

Elrey Jeppesen had a long and productive career. Born in 1907 in Louisiana, he grew up in Oregon where he started flying at age 16. His original pilot’s licence was signed by Orville Wright. That was in 1928, when the U.S. government first began registering pilots.

Soon he was sharing his little black books with other pilots. Before long, he realized demand was such that he needed to start publishing them. This led to the formation of Jeppesen & Co.

He retired from commercial flying in 1954 to concentrate on the classic Jeppesen Airway Manual. In 1961, he sold his company to the Times Mirror Publishing Company of Los Angeles. The Jeppesen company merged with Sanderson Films in 1974. Boeing acquired Jeppesen Sanderson in 2000, proudly calling it the “world’s leading provider of flight information services.”

Over the years, Jeppesen was honoured many times for his monumental achievements. He was named to the aviation halls of fame in Colorado (1970) and Oregon (2011), and to the National Aviation Hall of Fame in 1990. Most significantly, he was recognized in 1995 by the International Civil Aviation Organization for his contributions to the safe development of international aviation and of air navigation. ICAO’s Edward Warner medal is the greatest single honour the international civil aviation community can bestow.

Despite all the honours, “Jepp” never forgot his love for his early days of flying. In a 1990 Associated Press interview, he reminisced: “It was magical for me… Those old, open airplanes – you felt like a bird, part of the airplane. It was so damn much fun.”

Many thanks to George Lundeen who kindly provided photographs of his powerful sculpture of Jeppesen. Lundeen established his sculpting studio in Loveland, Colorado in the mid-1970s where he currently lives and works. Please visit his website to see examples of the work by this outstanding figurative artist and by other members of the Lundeen Sculpture atelier.

My thanks also to Bob Bancroft and Ian Macdonald, both members of the Canadian Aviation Historical Society, for reading and commenting on a draft of this article. The author, however, remains responsible for any errors of fact or emphasis. If you spot a problem, please let me know via the Reply box.