What Pilots Do on Long Flights – Then and Now 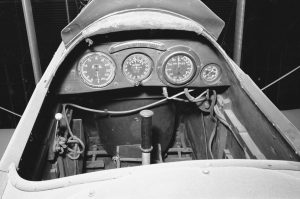 De Havilland DH.60G Moth, G-AAAH, collection of Science Museum, London, England. Flown by Miss Amy Johnson to Australia in 1930. © The Board of Trustees of the Science Museum. 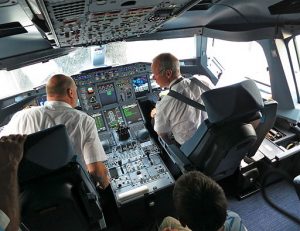 Crew on the flight deck of a Lufthansa Airbus A380, photographed on the ground at Frankfurt, 1 July 2012. Photo: Steve Jurvetson, via Wikimedia Commons.

Been on a long-haul flight lately?

A little bored, maybe? Passengers aren’t the only ones who struggle with the tedium of long hours in an airplane. In the cockpit or on the flight deck, pilots fight the same battle. What do they do about it?

An Internet search reveals a variety of answers. Some of what turns up may even be true!

Gossip makes the time fly by

Whether they do crossword puzzles, read magazines, study manuals for qualification upgrades (as suggested by their employers), fill in reports and forms, or whatever else they admit to, pilots try to keep their minds in gear. Novels and computers are verboten. It’s not the time for such engaging distractions. Conversation can help to pass the hours, from casual chit chat to solving the problems of the world. Add to this an endless chain of cups of coffee and the inevitable trips to the loo. Of course pilots also have to keep a watchful eye on their instrument panels.

Things were different 80 or 90 years ago in the “golden years” of aviation between the First and Second World Wars. Back then, automated control systems were little more than a dream. Pilots were directly involved both mentally and physically in the moment-to-moment business of hand-flying their “machines.” And there were fewer dials and gauges for them to monitor. Not to mention fewer planes in the air. As of 1 January 1929, the total number of airplanes involved in commercial aviation in Canada was 246. [1] 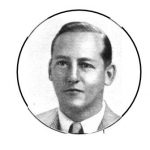 Winner of the 1926 King’s Cup Air Race, Hubert Broad was a test pilot for de Havilland, the Royal Aircraft Establishment and Hawker Aircraft. Photo from ad for Gipsy Motors, 1934.

But guess what? The very same question was posed in 1929 by an enterprising aviation writer with the Ottawa Journal. He was intrigued by a report that de Havilland Aircraft’s chief test pilot in England, Hubert Broad, MBE, AFC, read three whole novels during the 24 hours he spent flying a D.H. 60G Moth to an unofficial light plane endurance record. That flight was made in August 1928. [2, 3]

Columnist Francis W. Rowse decided to ask a number of “prominent Canadian aviators” how they passed their time on long, monotonous flights. The men he contacted (remember, this was 1929) were all members of the Royal Canadian Air Force – not surprisingly, since administration of civil aviation at that time came under the Department of National Defence. [4, 5]

“My lips are sealed!”

“All statements must be obtained from headquarters,” replied one Squadron Leader. “My lips are sealed.”

“I’d hate to tell you,” replied another. “And, anyway, it’s nobody’s business.”

Finally, an admission came from Stuart Graham, District Inspector in the Civil Aviation Branch, based in Montréal. [6]  His honest answer? “When the engine is making enough noise to drown me out, I sing.”

“The machine flies itself” 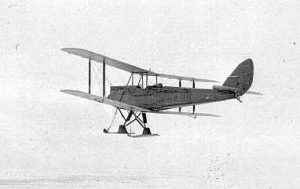 George Abbott, a Civil Aviation Inspector based in Ottawa, confessed: “On a particularly calm day, when I get tired of flying routine, I sometimes take my hands and feet off the controls and let the machine fly itself.” He explained, “It will often travel 35 to 40 miles without attention – that is for about 25 minutes.” Chances are, the aircraft he refers to was a D.H. 60 Moth biplane with a range of 320 miles and a cruising speed of 85 mph. Abbott went on to say, “It is quite possible to read a newspaper,” but added quickly, “It is not recommended that pilots allow anything to distract their attention from actual flying.”

Writing reports or reading a little was okay on solo flights, according to W. R. Kenny (later Air Vice Marshal in the RCAF), the last person quoted by Rowse. But what was really important, Kenny declared, was for a pilot to watch the country below him, “particularly over unexplored or little known country, such as was frequently encountered in Canada,” since the maps provided for airmen were “not accurate as to the nature of the country they had to traverse.”

We’ve come a long way in 90 years, from satellite mapping to jetliners carrying hundreds of passengers, but one thing has not changed. We still need alert and attentive pilots to keep the airways safe, and we will continue to do so even as the aviation industry adopts increasingly sophisticated flight deck display and control technologies. Care for another coffee, Captain?

[4] Rowse is mentioned ten years later (2 February 1939) in the Ottawa Journal as director of publicity and health education, Department of Pensions and National Health, Ottawa.

[5] The Department of Transport took over this role in 1936.

[6] Stuart Graham is considered to be Canada’s first bush pilot. In 1919, with air engineer Bill Kahre, and his wife Madge Graham as navigator, he flew a Curtiss HS-2L from Halifax, Nova Scotia, to Lac-á-la-Tortue, Québec. Graham and Kahre flew 57 forest mapping and fire patrols that year. See earlier post: https://flightsofhistory.perfectdayfactory.com/canadas-first-bush-pilot-stuart-graham/

Thanks to Robert S. Grant, Jay Hunt, and Ian Macdonald for reading and commenting on this article before publication. As always, the author has sole responsibility to any errors of fact or interpretation. If you see a problem, please contact me via the Comments box so a correction can be made.

The D.H. 60G Moth whose cockpit is shown above is in the collection of the Science Museum, London, England. You can visit online at: https://collection.sciencemuseum.org.uk/objects/co29432.