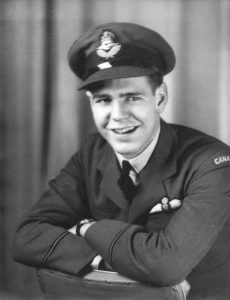 In February 2021, one of the few remaining members of RAF Ferry Command passed away. Peter Maitland was 96. He joined the RCAF in 1942. In October 1943, he was assigned to 45 Group of RAF Transport Command, the successor to Ferry Command.

At the age of 19, he was promoted to captain. From February 1944 until the end of the war, Capt. Maitland delivered Dakotas, Bostons and Lancasters to the United Kingdom, Morocco and the Middle East. His obituary is reprinted here by kind permission of the Maitland family.

Peacefully, at home with family at Lang Bay, Peter Ronald Maitland passed away at the age of 96 of natural causes. Peter was the beloved husband of the late Avora (nee Tuck), and the devoted father of Catherine (Ronald Jones) of Rochester, NY; Bill of Powell River, BC; Rick (Marguerite Duncan) of Calgary, Alta; Rory (Sue Mackinnon) of Powell River; Peter (Linda Maguire) of South Surrey, BC, and Kristin of Steveston, BC. He is also survived by 14 grandchildren, 19 great-grandchildren and one great-great-grandchild. He will be sorely missed by his family and his long-time dear friend Edna Devito of Powell River.

Peter was predeceased by his parents, Ronald Monteith Maitland and Laura Phipps, and his four older siblings, Patsy Bahr of West Vancouver, BC; Heather Beddall of West Vancouver; Douglas of Powell River; and Gordon of 100 Mile House, BC.

Peter was born in Vancouver and attended Prince of Wales High School, where he met Avora. In 1942, on the day after his eighteenth birthday, he enlisted with the Royal Canadian Air Force (RCAF). As a pilot assigned to the Royal Air Force (RAF) Ferry Command, Peter flew Dakotas, Bostons, and Lancasters from Gander, Newfoundland to Iceland and on to the UK, Europe, North Africa and the Middle East. Peter was likely the youngest four-engine captain on the route. By June 1945, he was delivering planes from the southwestern US to Australia, Polynesia, New Caledonia and Hawaii in support of the Pacific Theatre.

After the war Peter married, started a family, and earned a Bachelor of Applied Science degree in Mechanical Engineering from UBC. He worked for Barber Machinery in Calgary and then Union Carbide’s Linde Division, where he was transferred across Canada to Edmonton, Winnipeg, Toronto, Montréal, and finally to the Head Office back in Toronto. Returning to Vancouver in 1970, he took over Acetogen Welding Supplies Ltd.

In 1981 he and Avora retired to Powell River. Together they established a hobby farm, Roccabella, where they raised flowers, vegetables, chickens and Morgan horses. 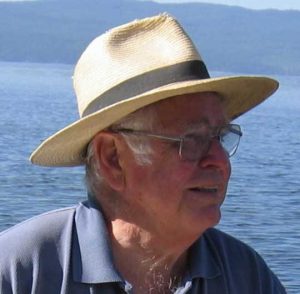 After Avora’s death in 1992, Peter built a house at his beloved Lang Bay, where his family has been summering since 1914, and where he engaged in his interests with characteristic persistence and passion. In September 1994, Peter took up flying again, having joined the Westview Flying Club in Powell River. His son Bill remembers a wonderful trip to Vargas Island, north of Tofino, and landing on the sandbar there. In 1995 he piloted his Piper Cherokee from Powell River to Gander to commemorate the fiftieth anniversary of V-E Day.

Peter served as a Director on the Powell River Hospital Foundation for over twenty years. He was involved in a number of activities to raise funds for hospital equipment such as the hydrotherapy pool and the CT scanner. One fundraiser he most enjoyed was selling raffle tickets for a Harley-Davidson Sportster.

Peter’s problem solving, design and engineering skills were legendary. Over the years, he built over a dozen boats, both sailing dinghies and runabouts, which are enjoyed by multiple generations. He was always tinkering and always maintained a well-stocked (and messy) workshop where he repaired everything from tractors to antique clocks, typically machining and welding any needed parts himself. Boats and workshops were passions he passed on to his family.

The Friday night ritual of crib, wings, and wine with his sons and friend, Rob Stewart, was always sacredly observed.

Each summer he presided over the gathering of his ever-growing family who knew him as “Gampa,” and whose lives were greatly enriched by his example: his many skills, his courage, his wisdom, his dry wit, and his unfailing generosity.

As one of the last of the Greatest Generation, on Remembrance Days Peter hosted observances to honour the service and losses of family and friends. After he passed, flags flew at half-mast along the shore of Lang Bay.

The family would like to thank Gael Collins, Jennifer Goodwin and Kim Koopman for their kind and thoughtful care of our dad. Any bequests in his honour would be gratefully received by the Powell River Hospital Foundation. A celebration of Peter’s life will take place at Lang Bay at a later date.

Thanks to Jack McGee, an RCN & CAF pilot retired in the rank of Colonel now living in British Columbia, for drawing Peter Maitland’s career in Ferry Command to the attention of Flights of History. Thanks also to Peter and Linda Maitland of BC’s Lower Mainland for permission to reprint this notice and for providing high resolution scans of the two photographs.