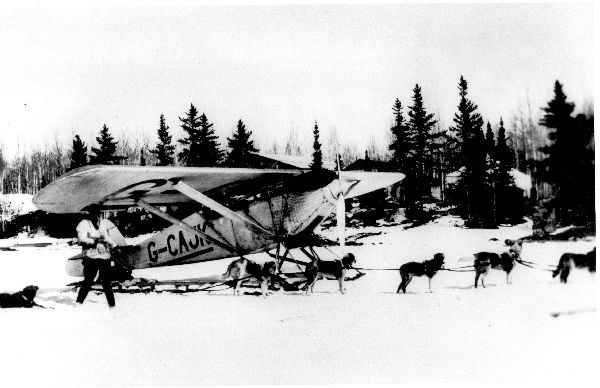 Called a “Lindy Look-alike” or a sister ship to Lindbergh’s Spirit of St. Louis, which was built by the same manufacturer, Canada’s only Ryan M-2 operated in this country from March 1928 to February 1932. My thanks to the Ottawa Chapter of the Canadian Aviation Historical Society for permission to reprint this article, first published in the November 2017 issue of their newsletter, The Observair. I’ve added more photographs to illustrate the story.

The only Ryan M-2 ever licensed in Canada arrived in Toronto on March 5, 1928, flown from Buffalo by my uncle, Howard Watt. He had been hired as manager of Eastern Canada Airways in early 1928, to operate G-CAJK from a base at The Pas, Manitoba. 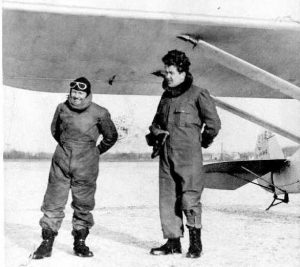 Built in 1927 by B.F. Mahoney of San Diego, the Ryan M-2 (c/n 22) was soon registered to Eastern Canada Airways as G-CAJK. She had been purchased for use by the airways’ parent company, Manitoba Basin Mining, to support mineral exploration and development at a time when prospecting and mining across Canada’s north was spurring the growth of commercial aviation.

Like many other airplanes of the day, the Ryan models M-1 and M-2 were open-cockpit monoplanes. They were designed with a fuselage of welded steel tubing covered with fabric, and a wooden parasol wing mounted above the fuselage. The length of 24 feet and wing span of 36 feet made the aircraft comparable in size to the DH 60 Moth at roughly the same length but with a 30-foot span. The Ryan M-2 featured here was originally powered by a 180 hp Hisso engine. 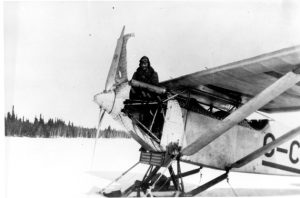 According to Alan Renga, archivist with the San Diego Air & Space Museum, some 19 M-2s were built. He explained, “The c/n numbers are mixed in with the Ryan M-1s, from which the M-2 was designed.  The M-1 and M-2 are very similar.  In addition, a couple of them were modified from M-1s, and different engines were often used on the same plane.  These factors, along with incomplete factory records, make knowing the exact numbers of M-2s produced difficult.”

Once in service for Manitoba Basin Mining, G-CAJK was flying regularly to places like Reindeer Lake and Cormorant Lake as noted by Winnipeg newspapers. No log books are known to exist that chronicle the daily routine of either aircraft or pilot. However, two extraordinary days caught the attention of the press. 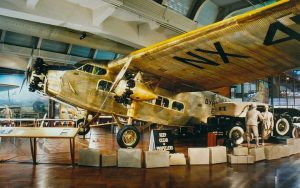 Admiral Byrd’s 1928 Ford 4-AT-B Tri-Motor airplane flew over the South Pole in November 1928. You can see it in the Henry Ford Museum in Dearborn, Michigan. Photo: THF39668.

One was the day in March 1928 when Admiral Byrd’s Ford Tri-Motor airplane visited Winnipeg. As reported by the Winnipeg Tribune, Watt staged an unscheduled exhibition of stunting in G-CAJK that thrilled the crowd of 2,000 people waiting at Kirkfield Park to see the aircraft that would fly over the South Pole. As the big orange machine overshot the airfield by 20 miles, two small airplanes took off to escort it back – a Western Canada Airways’ DH 60 Moth, and the Ryan M-2 flown by Howard Watt.

A second noteworthy day occurred in July 1928, when an intense electrical storm raged in the skies over Ottawa, leaving two land airplanes and two flying boats unable to land. With flashes of lightning on all sides, volleys of thunder gave the crews “all the thrills of warfare as they hovered over the Capital,” according to the Toronto Globe. The four aircraft landed safely when the storm ended, including the Ryan M-2 flown by Howard Watt. Also aloft during the storm was a brand new DH 60 Moth piloted by George Abbott of the Civil Aviation Branch, Department of National Defence, who was quoted as saying that “had it not been for safety belts, they would have been hurled from the plane.”

Despite the convenience, Manitoba Basin Mining operated their own aircraft for less a year. In January 1930, they sold the Ryan M-2 to Century Motor Sales of Toronto. Howard Watt was reunited with G-CAJK on 9 June 1930 when he bought the airplane from Century.

Although he was busy flying air mail for Canadian Airways on Québec’s North Shore, he found time to install a new engine, a 200 hp Wright-Whirlwind J-4-B, and applied to register the aircraft for private use. Certificate of Registration #1035 was issued to him on 31 August 1931. 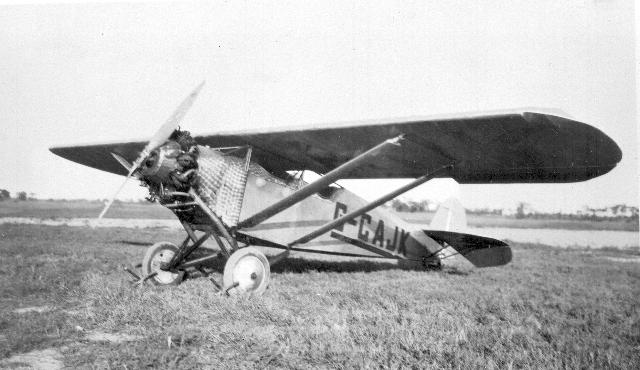 Once winter came, Howard and his younger brother Bruce were flying in the Lower St. Lawrence area. Bruce Watt was using the Ryan to transport bush workers between the forestry operations on the North Shore and their home villages on the South Shore. This was a niche market that the Watt brothers would target throughout the 1930s, building up such a good business that Canadian Airways seriously considered buying them out. 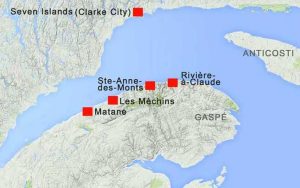 But the Watt brothers were about to encounter a severe setback. On 16 February 1932, Bruce Watt took off from Matane on the South Shore with three passengers at 8:30 a.m. and flew across the wide river to Clarke City, west of Seven Islands. Unfortunately, as he was flying back to Matane around noon, the engine began missing and the plane lost altitude.

Bruce was forced to land on pack ice near Les Méchins, a village on the Gaspé coast. Abandoning the airplane, pilot and passengers jumped from one ice floe to another desperately trying to get to shore. After two hours, they were rescued by a brave man who had seen their predicament and rowed out from shore through the ice. 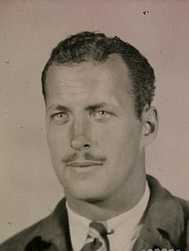 Efforts to recover the aircraft were thwarted by heavy squalls and by the pack ice blocking most of the Gulf. The last sighting of G-CAJK was reported to Ottawa by telegram: “We saw the lost plane passing by on February 29 at 8 a.m. about two miles from Rivière-à-Claude.” Like many a sailor, Canada’s only Ryan M-2 was lost at sea.

As a result of the incident, Howard Watt was without an aircraft and Bruce Watt was grounded. His commercial pilot’s license was suspended for four months, for undertaking commercial work in an airplane that had only a private license. It would be another three years before Howard Watt was back in business as a commercial aviation owner/operator as a partner in St. Lawrence Airways flying two D.H. 83 Fox Moths.

The San Diego Air and Space Museum (SADSM) was generous in providing background as well as access to photos. http://sandiegoairandspace.org/

Thanks also to the Canada Aviation and Space Museum (CASM) in Ottawa, Canada, for their resources for researchers. New link to their website: https://ingeniumcanada.org/aviation/index.php

Finally, a word of thanks to Robert G. Pelley of Québec for pointing out some ambiguity in the paragraphs about Howard Watt’s purchase of G-CAFK. The passage has been duly revised as of 26 December 2017.

About the Canadian Aviation Historical Society

Founded in 1962, the CAHS is a national organization whose mission is to encourage aviation history research with special emphasis on Canadian aeronautical history and the influence of aviation on Canada’s development.

You can also visit the Ottawa Chapter’s facebook page: https://www.facebook.com/CAHSOttawaChapter/