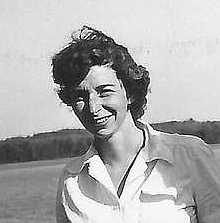 In 1950, Con and Barbara Campbell took a job with Gold Belt Air Service of Rouyn-Noranda, Québec, running their float plane base at Bachelor Lake. Flights of History is proud to feature chapters from Barb’s journal recording their experiences.

To view all her posts, just click on the Gold Belt Air Service category below the main title at the top of the page.

Before we moved to Bachelor Lake, Con and I spent part of the summer cutting a survey line through the bush in northern Québec in the wilds of Abitibi . “Why on earth would you do that?” you may wonder. Let me explain.

The Province of Québec is divided into townships. Most of the south and central townships have been surveyed and laid out in ranges, or concessions.  These are again divided into numbered lots, or claims.  Survey lines form a grid showing the location of mining claims or any ground recorded with the Department of Mines for mineral rights.  Cutting the lines out in the bush makes them clearly visible, for example to government geologists doing field work. That way, when they flail off a promising piece of country rock, they can check back for geological reports on the exact location. 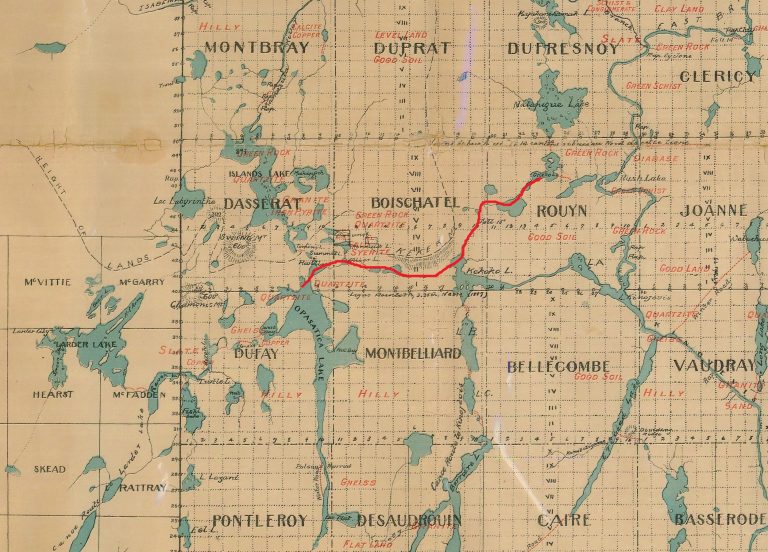 This 1907 Map of Pontiac North shows how the townships and ranges are laid out. The red line marks Edmund Horne’s snowshoe trip in spring 1922 from Lake Opasatica to Rouyn where he discovered the gold deposit that made Noranda famous. Credit: BAnQ Rouyn-Noranda, Fonds Société du patrimoine de Rivière-des-Quinze, P1,P230.

It was Con’s job, with the help of the Little Woman (me) and the two “Sunshine Boys” with the mouth organ, to cut this particular line through to the next township.  Once we found the metal post indicating where the range line intersected with the north-south centre line, the task was easy. It required nothing more than an accurate compass, a sharp axe, the power and perseverance of a Centurion tank, and the boundless enthusiasm of a Cub Scout on his first overnight hike. 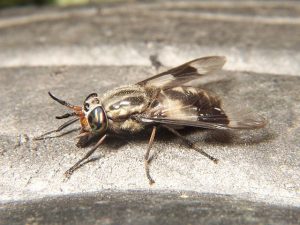 Female deer flies cut a cross-shaped incision in their prey, then lap up the blood. Anti-coagulants in their saliva prevent blood from clotting and may cause severe allergic reactions. Photo by Bruce Marlin via Wikimedia Commons.

My sole contribution was the Cub Scout enthusiasm, but Con was an old hand at this sort of business and worked with the singleness of purpose and tireless energy of a well-oiled machine ― though not a very well-grounded one, as he often coloured the air a livid shade of blue.  A mile of swampland, an interlocking tangle of alder and hazel, and the air stiff with mosquitoes, black flies, and “those triangular bastards” ― deer flies ― produced language apt to put his immortal soul in jeopardy.

And there I was, my blue-handled hatchet “Babe the Big Blue Axe” in one hand, the Jacob’s staff with compass in the other hand, and slung over my shoulder a canvas kitbag containing our lunch and a bottle of fly dope usually with the cap half off, plus a whetstone and file to deliver first aid to a wounded axe blade.  I thought I was indispensable, but Con must often have felt like sharpening my feet and driving me in among the other green saplings.

My job was to keep his line straight, a fairly simple task requiring only that three pickets set at intervals ahead of the compass be staked exactly to align with the proper bearing on the compass.  Con worked ahead of these pickets, hacking away at the wall of scenery, turning now and then to line up the pickets with his beady eye to be sure he was setting a true course.  As he advanced, I would move up too, putting in new markers and leaving the old ones in place.  This way we could look back to our starting point and see how far we had progressed as the day wore on.

Often I would stare back along a green tunnel and see the picket line marching away, up hill and down, until it disappeared.  At other times I would glance around to realize that the same darn boulder I had barked my shin on an hour ago hadn’t moved fifty feet.  Then with a fine disregard for my blistered hands I would seize Babe’s handle and engage in battle, whaling the daylights out of the vegetation and working like a fiend until my breath gave out.  Proud of the results, I would have at it again only to be halted in mid-hack by a whoop of laughter from Con.

“Never saw such a display of unguided energy in my life!”  He would point to where I had caused great carnage among a thicket of alders.

“Sure.  But how do you achieve those spectacular looking stumps ― all sort of chewed and grizzled at the ends?  Which end of the axe head are you using?” he asked with interest.

“The same one I’m going to use on the side of your head!  I thought we were cutting a line through this damn swamp ― I didn’t know you wanted it landscaped!”

“Oh, I wasn’t criticizing your work, honey; you’re doing a great job.  Now get back there on the compass and tell me where to plant this picket before you cut your head off.  Looks like we’re nearly through this heavy part now ― should have clear sailing for a while.”

Despite the teasing, I knew I was becoming more of a help than a hindrance as the toughening-up process progressed.

A Bush Rat at Heart

We had been doing this sort of work all summer, since I had left my office job, and the long, strenuous days showed in my appearance.  The tactful beholder would say “My, Barbara, you’re looking well since you’ve lost weight ― and such a becoming tan!”  Others would just scream when they caught sight of me.  As I noted the well-manicured hands and impeccable coiffure of a fellow female in town, It was a comfort to wonder just when was the last time she had felled a tree.

There were moments when I wondered somewhat uncomfortably if it wasn’t bizarre to prefer such sylvan pursuits to the ways of my contemporaries.  Fortunately, that only bothered me when I was in town and the comparison obvious.  Back in the bush once more, I felt truly at home and deeply contented with the life I led. Like Con, I was a bush rat at heart!

A Mining Story That Goes Way Back”  http://www.virtualmuseum.ca/community-stories_histoires-de-chez-nous/rouyn-noranda-une-histoire-de-mines_a-mining-story/story/une-histoire-miniere-qui-remonte-a-loin/