Finding La Vigilance at Lac Témiscouata — in a photo 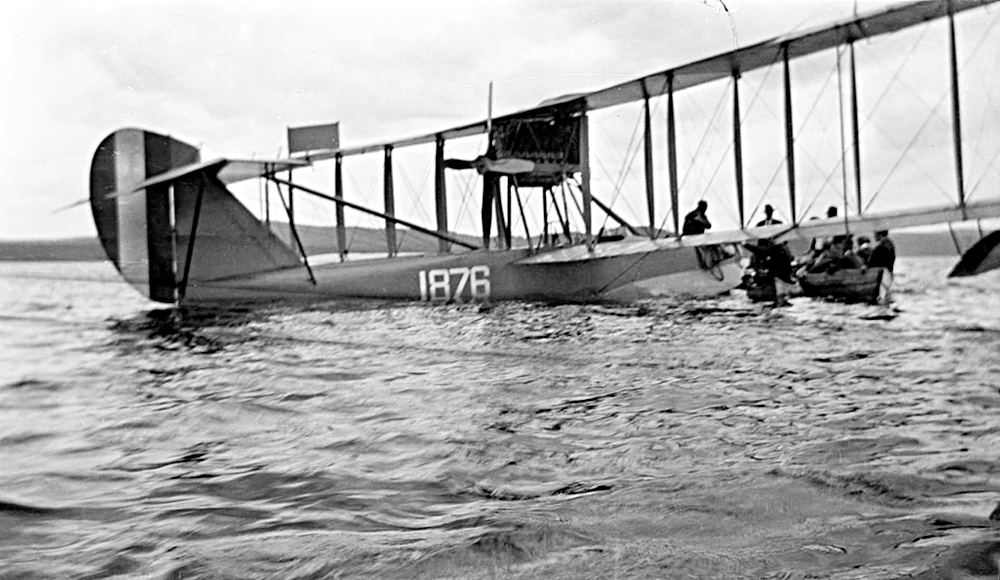 Aviation history buffs will find many treasures in Québec’s regional and local museums, as a friend and I discovered in 2015 during a 3,600 km tour of the North and South Shores of the St. Lawrence River.

Here is the story of one such treasure shared with us by staff at the Musée du Bas-Saint-Laurent in Rivière-du-Loup. It is a photograph that captures what is universally recognized as Canada’s first bush plane, a Curtiss HS-2L flying boat named La Vigilance, flown by our first commercial bush pilot, Stuart Graham.

The aircraft was one of 12 HS-2Ls presented to the Canadian government by the US Navy after the end of World War I.  The Americans had used these flying boats for anti-submarine patrols from bases in Nova Scotia. La Vigilance – US Navy A-1876 – was one of two HS-2Ls subsequently loaned by the Canadian government to the St. Maurice Forest Protective Association to support the forest industry in Québec’s Mauricie region.

A speedster at 66 mph

In June 1919, La Vigilance made her way from Halifax, Nova Scotia, to Lac-à-la-Tortue, Québec, near Grand’Mère, where she would support aerial fire patrols and forest sketching. She covered the 645-mile distance in a time of 9 hours and 45 minutes, at an average speed of 66 miles an hour.

On June 5, she left Halifax Harbour for Saint John Harbour in New Brunswick, and the next day proceeded to Eagle Lake, Maine, travelling through rain and poor visibility. On June 7, her route took her to Cabano, on Lac Témiscouata, Québec, where a supply of high-test fuel was supposed to be waiting to refuel the aircraft. In its absence, the pilot took on a drum of low-grade motor car gasoline in case of an emergency fuelling need. It was here that the museum’s photograph was taken.

Four and a half hours later, La Vigilance was sailing the skies to Rivière-du-Loup, where after half an hour of air time she landed on the St. Lawrence River and refuelled. There she stayed the night of June 7. Graham notes, “Strong wind across tide rip, and unable take off from rough water.”

Early in the afternoon of June 8, La Vigilance managed to get off and fly the 90 miles up the St. Lawrence to Trois-Rivières, where she landed at 3.35 p.m. In the evening, the HS-2L circled the town of Grand’Mere, dropping leaflets about forest fire prevention, and finally made her way to Lac-à-la-Tortue, landing half an hour before sunset.

We were thrilled to find this previously unknown photograph illustrating the daring journey of La Vigilance. Seeing this photographic treasure was one of the highlights of our visit to the museum. The other was seeing Territoires Imaginés, an outstanding exhibition of works by artists from the collection of Loto-Québec. Currently the museum has a special exhibition of fibre art, Tisser l’existant, featuring the work of Giorgia Volpe. There are also more than 125,000 “cyberphotos” online. For more information on the Musée du Bas-Saint-Laurent in Rivière-du-Loup, visit their website.

The story of La Vigilance goes on…

After two seasons of service with the St. Maurice Forest Protective Association, La Vigilance, now under Canadian registration as G-CAAC, taken over by the Laurentide Paper Company. In 1922, Laurentide Air Services was formed. The new company operated both La Vigilance and her sister ship G-CAAD, and racked up 688 hours during the open-water season, including forest survey flights for the Ontario Provincial Air Service.

Then disaster struck. On September 2, 1922, La Vigilance sank after bad weather led her pilot to make a forced landing on a small lake near Kapuskasing in Northern Ontario. All aboard walked out of the bush. Some 45 years later, the remains of the HS-2L were retrieved by what is now the Canada Aviation and Space Museum. To make a long story very short, you can see the original hull with your own eyes at the aviation museum in Ottawa, as well as a version of the HS-2L seamlessly created from parts of other surviving examples of this type of flying boat. For detailed information, see the aviation museum’s website.

Canada Aviation and Space Museum, notably the Stuart Graham Collection and the on-line article “The HS-2L in Canada”.