Ferrying Hudsons across the Atlantic – ATFERO 1941 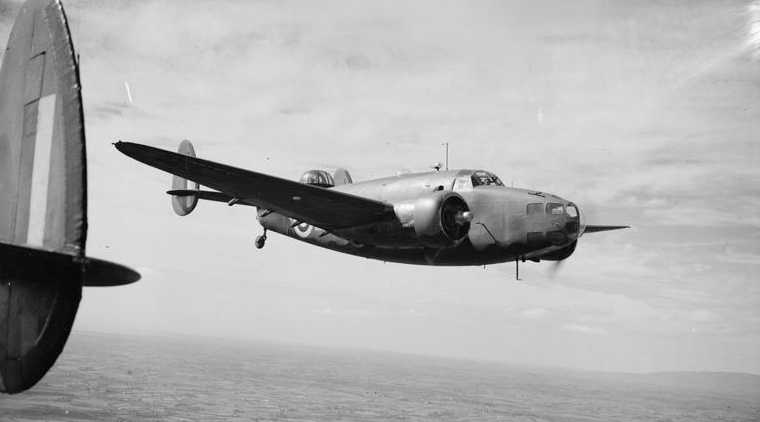 In the early months of the Atlantic ferry service, a top priority was delivering Hudsons from Canada to Britain.  Once assigned to their squadrons, they patrolled the coast and protected the shipping lanes.  Here, Hudson Mark II, T9376  ZS-X, of No. 233 Squadron RAF, returns to its base at Aldergrove, County Antrim, from a convoy patrol.  © IWM (CH 2838)

In for the Duration

My uncle Bruce Watt became a trans-Atlantic ferry pilot in 1940 when the ferry service was starting up.  At that time, it was run by the Air Services Department of the Canadian Pacific Railway Company from offices in Montréal.  Its mission was to deliver American-built bombers from Canada to defend Britain and the Atlantic shipping lanes during the Second World War.  Uncle Bruce would serve as a ferry pilot until April 1945.

He first crossed the North Atlantic in February 1941 as co-pilot and navigator on Hudson T9464 which pioneered the solo delivery of Hudsons to Prestwick in Ayrshire, Scotland.  Only 25 Hudsons had been delivered to the United Kingdom by air until then, and they had been sent in groups.

A sea voyage brought Watt back to Montréal from that assignment on 1 March 1941 – the very day when the ferry service officially became the Operating Division of the British Ministry of Aircraft Production.  It would be known for the next four and a half months as ATFERO, the Atlantic Ferry Organization.

During the month of March 1941, ATFERO delivered five Hudsons and one Liberator from Montréal; 15 Catalinas (PBY flying boats*) from Bermuda; and one Catalina that went from San Diego.  Watt was not among the pilots involved. His next delivery came in April.

On 16 April 1941, Bruce Watt was promoted to captain.  The official records show him as “captain-navigator.”

Almost immediately, he was assigned as captain to deliver a Hudson III, serial T9417.  Watt and two crew members, Pilot Officer Merrifield of the RCAF and Radio Officer Drake, flew to Gander from Saint-Hubert airport near Montréal on 24 April.  The next evening, they crossed the Atlantic, touching down at Prestwick on 26 April after a flight of 12 hours and 34 minutes. 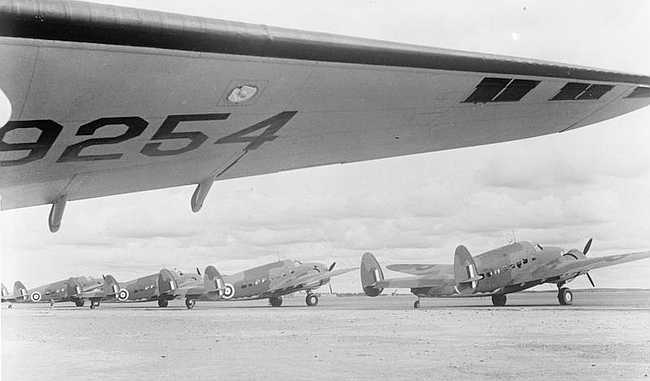 Hudson T9417 was soon allocated to RAF 224 Squadron, then to RAF Coastal Command 53 Squadron where it served on operations against enemy shipping and enemy submarine attacks.  Less than a year later, the aircraft was destroyed. Following a swing on take-off and subsequent undercarriage collapse, it burned out on 28 March 1942 at Manby, Lincolnshire.  The pilot and crew escaped uninjured.

On 9 May, Watt sailed home on the S.S. Edam.  Fifteen days at sea with all the dangers of North Atlantic storms and enemy U-boat attacks brought him to Montréal on 23 May, a month after his 24 April departure. 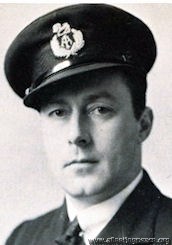 In his book on the Atlantic air ferry, Sholto Watt (no relation) describes the overcrowded cabins, the hastily fitted bunk beds, the meals at restricted hours, and the total blackouts that precluded smoking on deck at night for fear a lit cigarette might be seen by a German submarine three miles away.  A palpable anxiety prevailed until the ship reached the shores of North America.

Steamship travel was a risky business during the war, no doubt about it.  For ATFERO, it was also a major stumbling block that slowed the pace of aircraft deliveries.  More than once, so many pilots were at sea that there was no one available to fly aircraft ready and waiting on the tarmac in Montréal.

Those aircraft were desperately needed in Britain.  At this critical time, the country was suffering under the heavy bombing of the Blitz, and the Battle of the Atlantic was raging on.  To speed up the return of personnel, officials created the Return Ferry Service, using modified Consolidated Liberators to bring air crews back across the ocean by air.  Watt might have preferred to be one of the seven passengers on the first westbound flight made 3 May 1941 by BOAC Captain Jimmy Youell with Liberator AM260, but travel in the bomb bay of a B-24 Liberator was certainly no picnic either, and even the Return Ferry Liberators were exposed to the hazards of war.  Sholto Watt (p. 138) reports that this flight was delayed by 24 hours in taking off from Squire’s Gate near Blackpool, Lancashire, by a German bomb that exploded in the general vicinity.

Watt Delivers a Second Hudson – AM799

Watt’s next delivery was in June.  This time the aircraft was a Hudson V, serial AM799. On 21 June, with Pilot Officer Brown and Radio Officer Lynch, he flew from Montréal to Gander.  Along with several other crews, they were held up at Gander waiting for favourable winds and weather.

AM799 was the last of six Hudsons to take off on 24 June in the 35 minutes between 6:01 PM and 6:36 PM – more than were delivered during the entire month of March 1941.  Watt and his crew landed Hudson AM799 at Prestwick on 25 June at 5:10 AM, making a total delivery time of close to 15¼ hours, including both the Montréal-Gander and Gander-Prestwick segments of the trip.

On arrival in the U.K., Hudson AM799 was allotted to Coastal Command 220 Squadron but would meet its fate a mere five months later.  On 28 November 1941, the aircraft took off from Wick, Caithness, in the far northeast of Scotland, to participate in an attack on enemy shipping near Stavanger, Norway.  Somewhere over the North Sea, it suffered engine failure and was lost with the crew of four. No bodies were ever recovered.

Return Ferry – Enduring the Ride Back

This time, Watt was spared the sea voyage home.  Instead, he had the pleasure of making his first trip on the Return Ferry Service aboard Consolidated Liberator AM258 with Captain Trevor Cripps at the controls.  They left Prestwick on July 5, and reached Montréal via Gander on July 6.

Liberator AM258 served in the Return Ferry Service from May 1941 until September 1943, when it crashed taking off from Prestwick, Ayrshire, Scotland, for a test flight.  By permission: 1000aircraftphotos.com

It’s hard to imagine what those return trips were like, but here’s a quick picture, based on first-hand accounts.

First, there was the question of whether the heavily-laden Liberator could actually get off the ground.  Returning crew members worried about this endlessly.  A ritual countdown became commonplace, with each man silently counting to the magic number he believed represented the maximum time it could possibly take a Liberator to get in the air.  Clutching your lucky charm in a sweaty fist helped ward off the dangers. 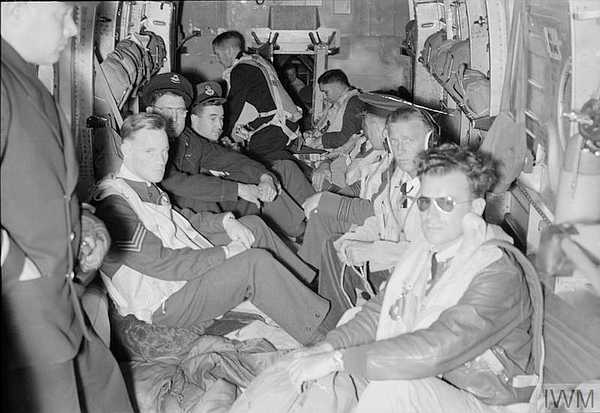 Ferry pilots return to Canada from Prestwick, Ayrshire, on board a Consolidated Liberator of the North Atlantic Return Ferry Service. © IWM (CH 14376)

The passenger arrangement for take-off was described by Griffith Brewer in an article that appeared in Flight magazine in 1941.  “Our instructions were to go as far forward as possible, so we pushed forward to the bulkhead and lay tight up against each other.”

Once the Liberator was airborne, he continues, the human ballast was “allowed to come out of the darkness, and we emerged into the entrance compartment.  There were two high benches on opposite sides, covered with life-belts, and one could stand in the compartment or climb onto the life-belts, when one got a view through small side windows.”  Or you could move back into the rear compartment where you could sit on the edge of the wooden platform and put your feet down a foot onto the metal floor below.  Freedom to move around and to smoke compensated for the lack of seating, Brewer writes.

As the Liberator gained altitude and night came on, each man made a bed for himself on the Kapok life-belts and rugs.  “We all wore flying suits, and some had overcoats,” says Brewer.  But it must have been miserably cold until the aircraft warmed in the morning sun, waking the men from their overnight hibernation.

The trip home by Liberator was yet one more wartime hardship to be endured.  In Ocean Bridge, Carl Christie writes: “Whatever the hazards of the delivery flight, [the aircrew] invariably looked on the trip back to North America as even worse.”  And Air Commodore Griffith Powell, in his memoir Ferryman, refers to the Ferry Command saying that “crews were not paid to take aircraft over but to endure the ride back.”

Don McVicar goes through some interesting calculations towards the end of his book Ferry Command.  In the chapter entitled “The Needles,” he compares Ferry Command operational flying with Bomber Command tours.  He estimates the average Ferry Command delivery counting both North and South Atlantic routes as 20 hours, plus another 20 hours for the return trip, making about 40 hours per operation.  For Bomber Command, he reckons the average operation was 7 hours.  At a maximum of 30 sorties, a Bomber Command pilot would put in about 200 hours before reassignment, while as Ferry Command pilots, he notes, “we were in for the duration.”  Not only that, McVicar writes, but Ferry Command pilots were at the controls of “untried aircraft full of bugs,” on long monotonous flights over “dangerous water and uncharted jungle or Arctic land.”  On the other hand, he acknowledges, “operational types got shot at a lot.”

McVicar’s analysis prompted me to work out a different set of numbers focussing on the delivery cycle.  In the case of Hudson AM799, Watt’s delivery air time was 15¼ hours.  On his return flight, he spent 18 hours in the air plus a 1-hour layover at Gander.  This gives an operational flying time of 34¼ hours.  But then you have to add on the 3 days in Gander waiting for good flying weather, plus approximately 10 days in the U.K. waiting for transportation home.

Watt left Montréal on June 21 and returned on July 6, meaning that he was tied up on this assignment for 16 calendar days.  His next assignment started 12 days later on July 18.  Some if not all of that July 6-18 period was likely granted as home leave.  Whatever the case, the elapsed time from the start of one delivery to the start of the next assignment was nearly one full month.

In light of these figures – and presumably this was a common pattern – pilots might have averaged one delivery a month at that point in Ferry Command’s history.  Air Commodore Griffith Powell in his memoir Ferryman recalls that the return cycle in the early days could be as long as six weeks.  No doubt the total time per delivery dropped as the Return Ferry Service achieved a three-times-a-week schedule.  In any event, this example sheds light on the headaches faced by the personnel in Crew Assignments as they juggled delivery pressures with multiple delays beyond their control.

Revised 21 April 2017 in response to a private comment from Bob Smith, CAHS Ottawa. Thanks, Bob.

Sincere thanks to Major Mathias Joost, of the Canadian Armed Forces Directorate of History and Heritage, for providing scans of Bruce Watt’s crew assignment cards and passing along other information used here. Thanks also to Ian McDonald for his assistance researching the histories of Hudsons T9417 and AM799, and for critical reading of the draft of this post.

Sole responsibility for any errors of fact or interpretation rests with the author. Please let me know if there are points you feel need correction.