Canadian Aviation Historical Society member Darrell Hillier, whose special interests include Ferry Command and Gander aviation over the years, tells the full story of Hudson T9446 which crashed in December 1940 with my uncle Bruce Watt on board as first officer.

My thanks to Mr. Hillier and to Robert G. Pelley for permission to reprint this article from the website: http://bobsganderhistory.com

For more postings and publications on the aviation history of Newfoundland and Labrador, visit Darrell Hillier’s website: http://www.crossroadsoftheworld.ca/

On 10/11 November 1940, Captain D.C.T. Bennett led the first of four experimental formation flights of Hudson bombers from Gander to the United Kingdom – the genesis of what would become RAF Ferry Command. The next two flights went without incident, but the fourth and last of the formation flights in December did not go so well. Four Hudsons crossed successfully while Captain Rogers’ T9445 returned due to engine trouble and another, Hudson T9446, crashed and burned on take-off, blocking the runway for the last Hudson. The crash of T9446 represents the only mishap at Gander during the flight experiment of late 1940, but it was nonetheless near fatal.

The last experimental flight, again led by Captain D.C.T. Bennett, prepared to lift off from runway No. 1 the night of 28 December. All boundary lights were put into operation and a row of thirty-eight paraffin flares evenly spaced the entire length of the runway’s centerline. “The runway was in good condition,” reported the Aerodrome Control Officer, Squadron Leader Harold A.L. Pattison, RAF (retired), “with an average of one inch of frozen snow over the surface.”

American V. Edward Smith, among the pilots to make the historic flight of 10/11 November, would tonight deliver Hudson T9446. First officer Arthur B. Watt was first to enter the aircraft. This would be his first transatlantic flight. He completed a cockpit check, whereupon T9446 was towed from the aerodrome’s then only hangar. Watt started both engines, which showed satisfactory oil pressure and temperatures, and then gave way his seat to the captain who made his own cockpit check. The Hudson was still on the hangar ramp when Alton M. Loughridge entered and took his position in the radio operator’s compartment just as he had done for Smith on the night of 10 November. Smith taxied to the southeast end of runway No. 1 and took up aircraft position number six on Captain Bennett’s starboard side, as was the sequence in November. The engines on T9446 continued to warm as Smith made his take-off check – airscrews (propellers) in low pitch, carburetor heat hot, tail wheel unlocked, auto pilot off, trim tabs at zero, and so on. The first five Hudson bombers lifted off in succession without incident. Smith was next. He made a final cockpit check and looked at Watt who was slowly operating the fuel hand pump with one hand and the other on the tail wheel lever. Watt described the take-off run:

After a second or two the aircraft slowly began to bank to the left, gently at first but increasing. Looking over at Captain Smith I saw he was fighting for control and as the bank was still increasing he quickly reached around the pedestal (as I learned later) to check the automatic pilot which had been in the off position at the start of the take-off.

I did not interfere, continued pumping and looking out the windshield, and I watched the bank become more steep and as the nose of the aircraft dropped below the level of the lights on buildings in front of us, I switched off the main ignition switch — then CRASH.

On recovering from the shock I observed Captain Smith assisting Radio Operator Loughridge out through the side port window. Flames outside in front and on both sides. I tried to open the emergency hatch above me, but using all my strength I could not make it operate. The side starboard window being partly broken I broke the remaining glass in it and made my exit while Captain Smith was going through the port side window.

Smith, suffering from shock and minor cuts and abrasions, later described his initial take-off run as “perfectly normal.” Passing the control tower, he noticed a slight aileron flutter, but then “the ship had approximate flying speed and came unstuck and settled back. At that point the automatic pilot took over control,” evidently having crept forward from the “off” position. The Hudson yawed sharply, the left wing dropping as Smith fought for control. It continued swerving to the left as the wing tip scraped the runway for three hundred feet, at which point the propeller cut into another twenty-two feet of tarmac. The stricken ship continued to the edge of the runway, flattening a boundary cone light before coming to rest in flames in an open ditch. The airport crash tender shortly arrived on scene near the west end of runway No. 1 and pulled to within three feet of the port wing. The fire crew dispersed CO2 gas upon the burning fuselage.

Hudson T9446 Tail unit and turret cover. The numbers “446” are visible on the scorched fuselage.

The effort was in vain for just as quickly as they extinguished the flames so did gasoline flow back and reignite. On being told that the crew had escaped, “and as the blaze was completely beyond control,” reported fireman R.N. Wells, “we stood by until it sufficiently cooled down when our 2-gallon Suds Extinguishers were used to save what was possible of the starboard engine and to extinguish small burning parts.” The wreckage was afterwards placed under guard with a detachment of the Royal Rifles of Canada.

Control officer Pattison, unsure how best to proceed with a British Ministry of Aircraft Production-owned aircraft, cabled Lieutenant Colonel H. Burchall, the ministry’s representative in Montreal and general manager of the Canadian Pacific Railway (CPR) Air Services Department (later reorganized as Ferry Command), which arranged the early ferry flights out of Gander. Burchall’s response left the matter in Pattison’s hands. Assisted by RCAF pilot Flight Lieutenant Dennis, airport operations officer Tom McGrath, and Gander CPR Air Services staff L. Sampson and chief engineer Jerome Coulombe, Pattison carried out a daylight examination of the wreckage. The Hudson had come to rest nearly parallel to the ditch with the wings on opposite sides. The starboard engine remained in position, unlike the port engine, which rested six feet from the port wingtip. The intense heat had rendered the front cockpit unrecognizable. The tail wheel showed as locked and the starboard wing flaps were in the up position. The men could find no component or control of the automatic pilot. Pattison admitted being unfamiliar with the device and could offer no opinion on Smith’s statement. However, he did lean towards attributing the cause “to a stall owing to lack of flying speed when the aircraft first left the ground.” The matter, it seems, ended there. The first day of the year 1941 opened with a Captain Rogers shuttling the three stranded and very lucky crewmen back to Montreal aboard Hudson T9445.

One writer has suggested that December’s accident involved Hudson T9465, the “Spirit of Lockheed-Vega Employees,” and not T9446. His theory can be read at:

The author’s counterargument can be read at:

(All photos courtesy of The Rooms provincial archives) 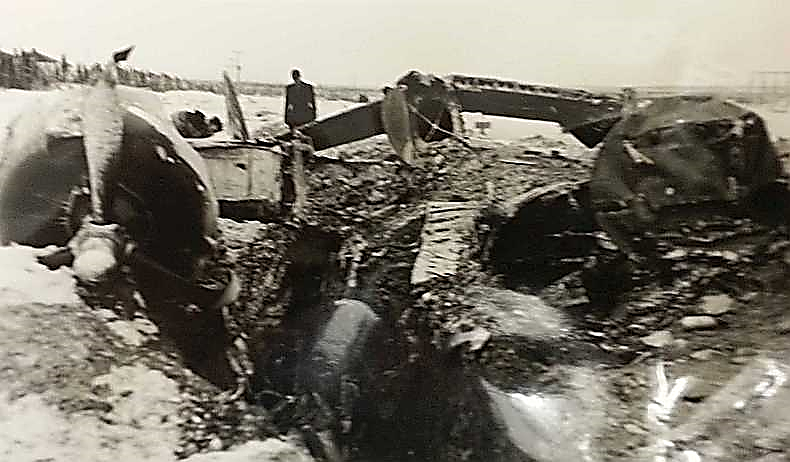 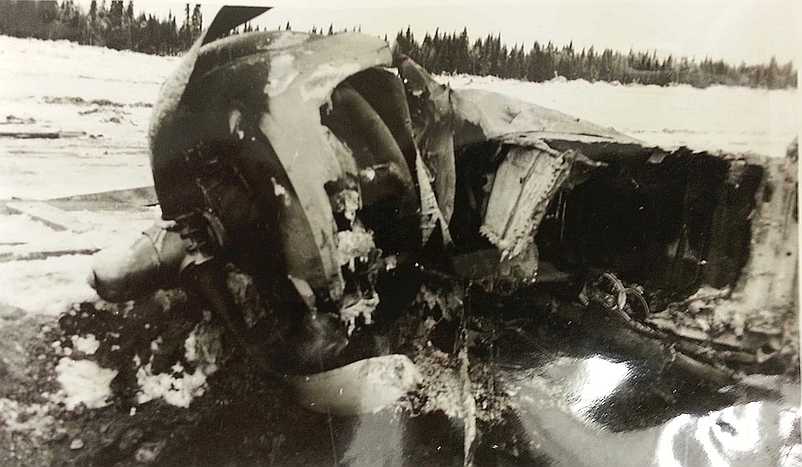 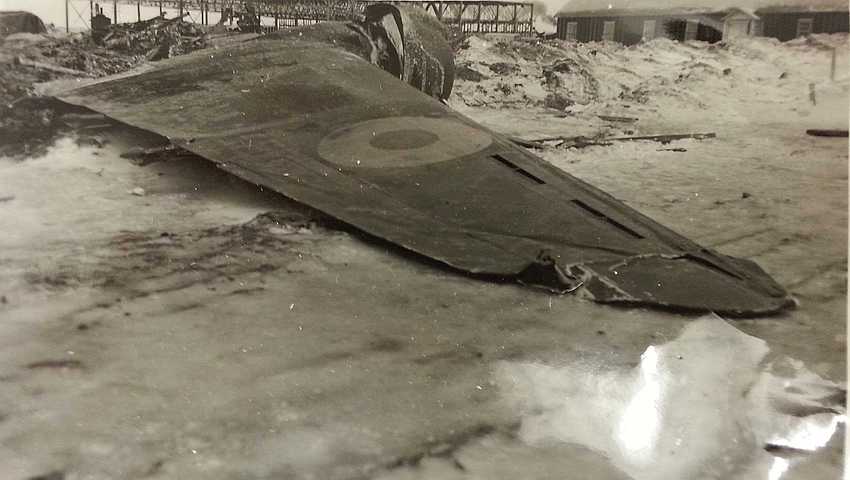 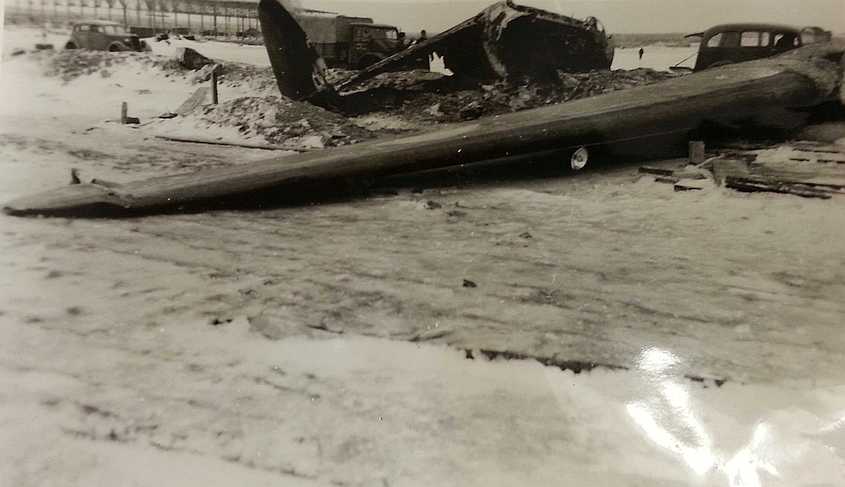