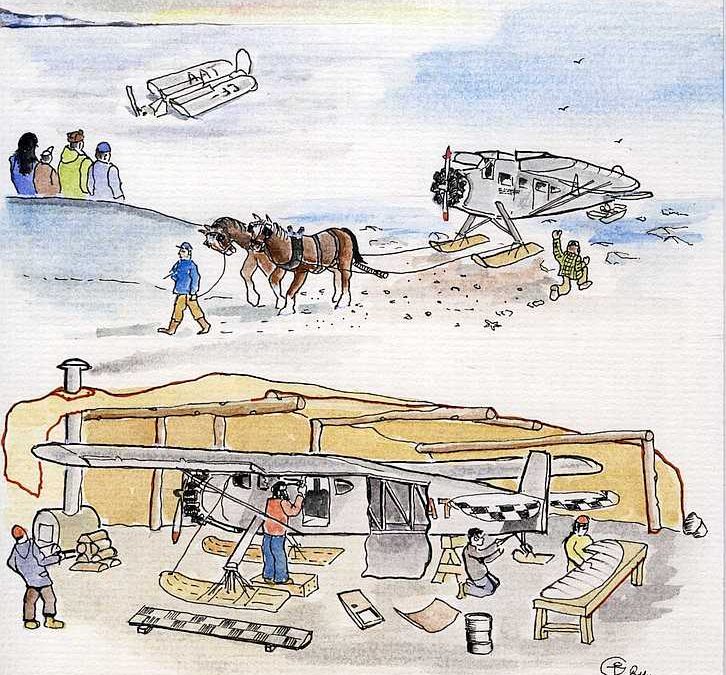 Why an Airplane Sank at Shelter Bay

The story begins with an airmail “cover,” as collectors call an envelope with postal markings, featured in the Canadian Aerophilatelist five years ago. Editor Chris Hargreaves provides some background, below. 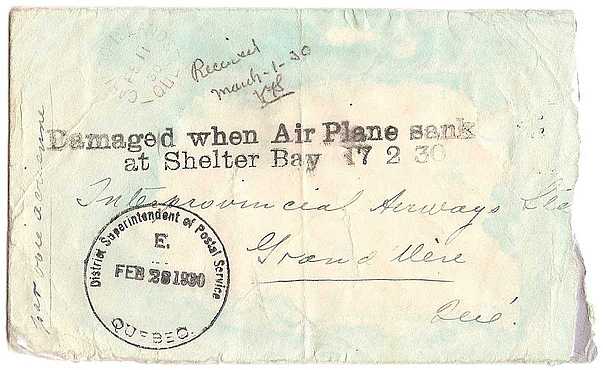 This cover was first illustrated in the December 2011 Canadian Aerophilatelist. It was featured again in the March 2015 and June 2015 issues.

The annual report for 1930 submitted by Canadian Transcontinental Airways to the Civil Aviation Branch of the Department of National Defence established that the aircraft involved was a Fairchild 71, CF-AAT, which was assigned to the Quebec – Seven Islands – Anticosti Island air mail run. It had made an unscheduled landing at Shelter Bay on February 17th, and later sank through the ice.

Diana Trafford has now discovered what happened in Shelter Bay during the night of February 17th/18th, and afterwards. 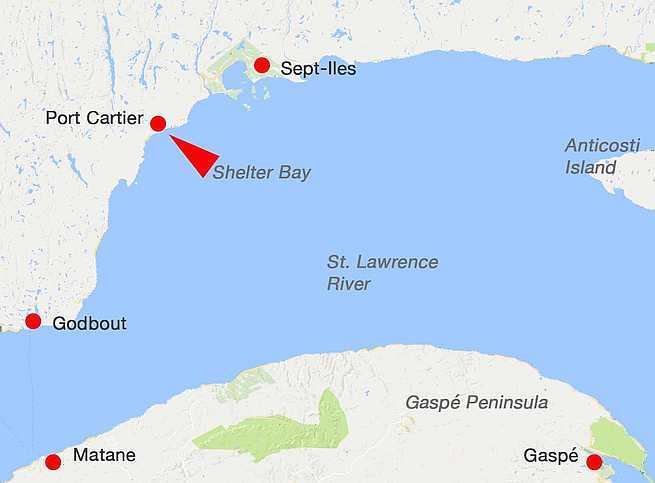 Shelter Bay, where CF-AAT went through the ice, is now a suburb of Port-Cartier, Québec.

Pilot Alex Schneider and the “Wet Mail” from Shelter Bay

The story behind the story… In June 2016 I spent two weeks in Winnipeg going through the extensive Canadian Airways Limited collection at the Manitoba Archives. As luck would have it, I requested the file of correspondence with the Stout Aircraft Company, a Ford subsidiary. In the same box, I spotted the pilot file for Alex Schneider and decided to check it out. Alex Schneider turned out to be the pilot of CF-AAT, the aircraft whose dip in the St. Lawrence River led to the mail getting wet.

Although the cover that got wet in Shelter Bay was initially described as a “crash cover”, the mail got wet because of a parking problem, not a crash.

The aircraft was on its way back to Québec after delivering 800 pounds of mail to Sept-Îles, and was carrying 25 pounds of mail on the return trip.1 Chris Hargreaves estimates that this would have amounted to some 750 items – assuming that the mail in question was all regular mail, and that the average weight per letter was ½ ounce, giving about 30 letters a pound.2

For reasons no doubt related to weather conditions, Schneider landed on the shore ice at Shelter Bay (now part of Port-Cartier) and parked the aircraft there for the night. Remember that the St. Lawrence is a tidal river from Québec out to the Gulf of St. Lawrence.

Here, in the words of the pilot, Alex Schneider, is the story of what happened on the night of 17 February 1930 to CF-AAT, a Fairchild 71 operated by Canadian Transcontinental Airways on the Québec North Shore air mail route.3 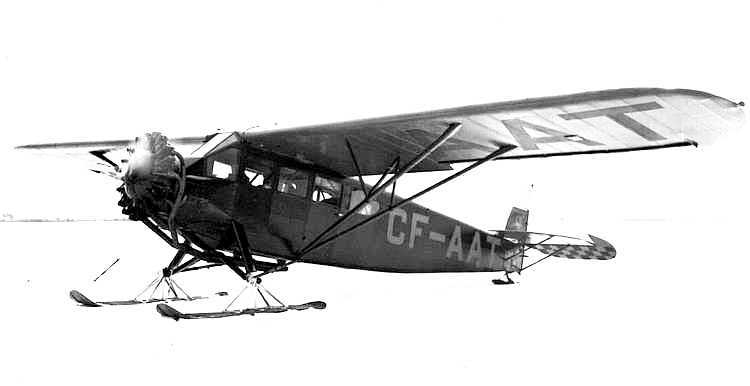 On a mail flight at Shelter Bay in February 1930, the Fairchild 71 CF-AAT was parked with folded wings overnight on the ice, about 30 feet from the shore. Shelter Bay is located on the North Shore of the St. Lawrence River. The bay was solidly frozen from the shore to 40 miles out.

Next morning at 5:30 a.m., my AE (Air Engineer)4 woke me up saying, “Alex, AAT has disappeared! During the night a great storm has pushed the waves from the open water 40 miles out under the ice and broken up the whole 40-mile-wide ice field right to the shore. It is high tide now and huge chunks of ice are everywhere floating and bobbing around in the water.”

I did not believe him. “What have you been drinking, Caribou?5 He was so excited, he started speaking in French, his mother language: “Non, non, il est vrai, AAT est disparu‼” Well, I got up to see.

As the tide went out, the aircraft reappeared. Every window except the front windshield was broken by the ice floes, and the whole plane was covered with a glistening sheet of ice. With horses, AAT was pulled ashore at low tide. We dismantled her and thawed her out under sails rigged up as a tent. A number of camp stoves were kept stoked to provide the heat for drying out the aircraft. Wood from orange crates was installed in place of the broken window panes. I flew the ship back to Montreal three days later.

The native camp cook told me that never in his life had the ice broken up in February; usually break-up came at the end of March or in April.

The company lost no time expressing their appreciation. A telegram to Schneider on 18 February 1930 reads:

When Did Schneider Actually Reach Québec?

Although Schneider’s account mentions returning to Québec three days after the mishap, presumably on 21 February, and the same reference to three days appears in Le Soleil of 14 April 19307, the company records do not agree. Normally, one of the best ways of verifying such facts is from the aircraft log books. Unfortunately, no log books survive for CF-AAT for the period before July 1930.8 However, a handwritten summary of the 1929-1930 winter air mail season in the Canadian Airways files shows that Schneider flew back to Québec on 25 February.9 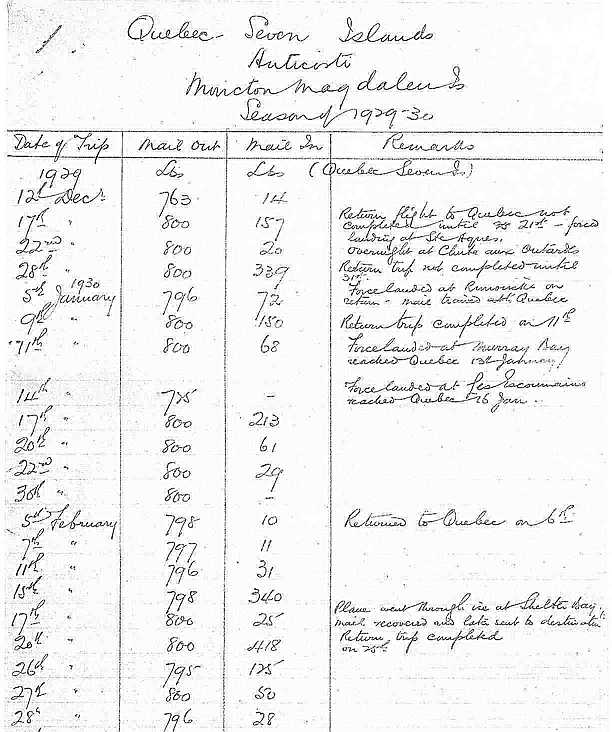 After returning to Québec, CF-AAT was sent to Lac-à-la-Tortue near Grand-Mère, Québec, for complete overhaul in the company’s workshops there.  The aircraft was officially inspected and on 8 March 1930, was declared airworthy by the Civil Aviation Branch.10  Re-registered to Canadian Airways in 1932, CF-AAT would continue in service until March 1936 when an air lock in the fuel system led to a forced landing north of Sioux Lookout and the subsequent write-off of the aircraft.

The name of Alexander S. Schneider is not well known in Canadian aviation history, but it should be, for he was one of our most accomplished pioneer bush pilots.11

Alex Schneider had an illustrious 50-year career in aviation. Born in Germany in 1901, he learned to fly in 1918 in the German Navy Flying Corps. When commercial aviation resumed in Germany in the 1920s, Schneider was one of the first pilots engaged, working for Deutsche Luft Hansa and its predecessor companies.

When he left Germany to immigrate to Canada in 1928, Schneider had more than 1,000 hours of flying time to his credit. He received his Canadian pilot’s licence #327 on 21 July 1928, under newly implemented international reciprocal arrangements. He then joined the staff of Canadian Transcontinental Airways (based in Québec) as a bush and mail pilot, and later flew in the same capacity for Canadian Airways Limited, after that company’s takeover of Canadian Transcontinental. In 1935, he signed on as a test pilot with Fairchild Aircraft of Longueuil, Québec. Among the planes he test-flew during his five years with Fairchild were the FC Super 71 CF-AUJ and all 24 of the Fairchild 82 models produced. Schneider was also a certified Air Engineer.

With the onset of war, Fairchild began manufacturing Bolingbrokes, and reluctantly had to let Schneider go because of his birthplace, despite the fact that he had become a Canadian citizen in 1933 and not only had letters from such eminent figures as J. A. Wilson, describing him as “one of the soundest pilots in the country,” but also had an all-clear from the RCMP.12

Canada lost an outstanding pilot when Schneider eventually moved to the United States and became a U.S. citizen. There he spent 15 years with North American Aviation in Los Angeles, completing assignments on Sabre Jet and F-100 fighter planes, training NATO troops in the use of jet-engine planes, and instructing the Royal Air Force in the operation and launching of nuclear-tipped Thor missiles. He retired in 1968 to live in San Jose, California.

The Artist – The painting of the incident at Shelter Bay on the front cover is by Paddy Gardiner. Paddy was born in 1934 and raised in both the U.K. and Ireland. After apprenticing in aircraft engineering and immigrating to Canada almost 60 years ago, he had various employment, although not always in the aviation field. After the Avro Arrow Affair, he worked in heavy industry, electronics and even installing radio equipment in the Far North. Paddy had an interesting few years working in the survey aircraft modification field. Finally, he was employed by The Boeing Company, which was an enjoyable end to his working days. The art Paddy now does is for relaxation.

Many thanks to Diana Trafford, John Davidson and Paddy Gardiner for this article and illustrations; and to Derek Rance and Ian Macdonald for their earlier research on this cover.