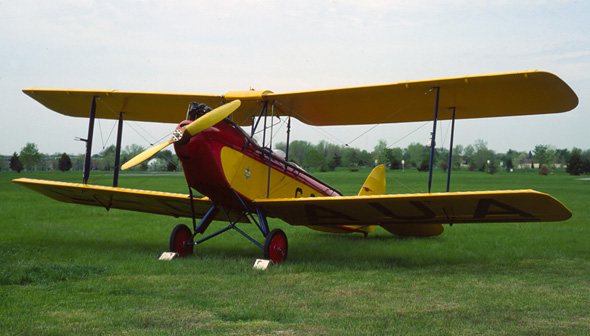 One of six Cirrus Moths delivered to de Havilland Canada at the Trethewey Estate on 13 July 1928, this DH 60X Moth (c/n 630) was registered on 7 August 1928 to International Airways of Canada, Hamilton, Ontario, as G-CAUA. It can be seen today at the Canada Aviation and Space Museum, Ottawa, Ontario. An all-wood Moth, it has a plywood box fuselage and folding wings of doped fabric over a spruce frame. The wing span is 30 feet; length 23 feet, 8 ½ inches; and gross weight 1550 pounds. With an 85 hp Cirrus II in-line engine, it has a rated cruising speed of 85 mph.

Special thanks to John Bertram, 1st Vice-President, Toronto Chapter, Canadian Aviation Historical Society, for permission to use his photos to illustrate this post. For a link to all his photos from the plaque ceremony, see the Sources and Resources list below.

A crowd of perhaps a hundred people – a mix of aviation history buffs and local residents – gathered on 15 July 2017, in the Jane and Eglinton area of Toronto, to honour an almost-forgotten part of Canada’s aviation history, the Trethewey Airfield. 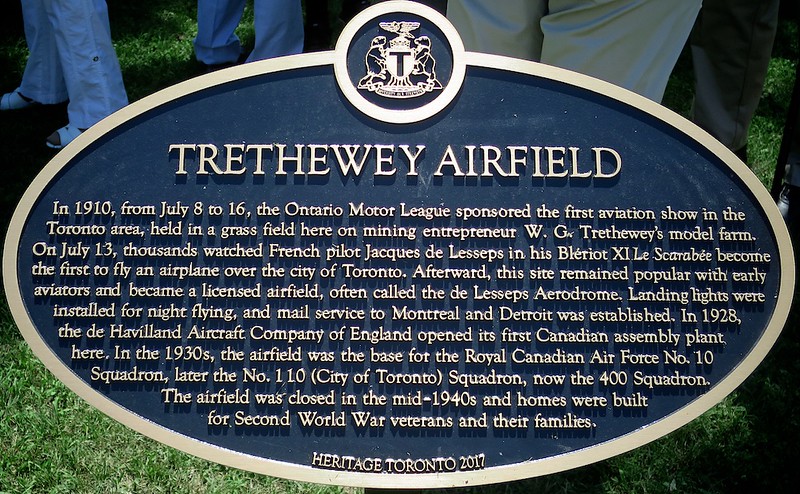 Hard to believe when you’re standing in the middle of an urban residential area, but this was the site of the famous 1910 Toronto Air Meet featuring the Wright Brothers exhibition team and the French Count Jacques de Lesseps, who thrilled one and all by flying over the city of Toronto during the Air Meet.

In the 1920s, the Trethewey Airfield near the village of Mount Dennis was used by a number of early aviators – including my uncle, Howard Watt, who thought of setting up a flying operation here in 1926, but went to Willowdale instead. That family connection guaranteed that I would be among those present for the plaque dedication. 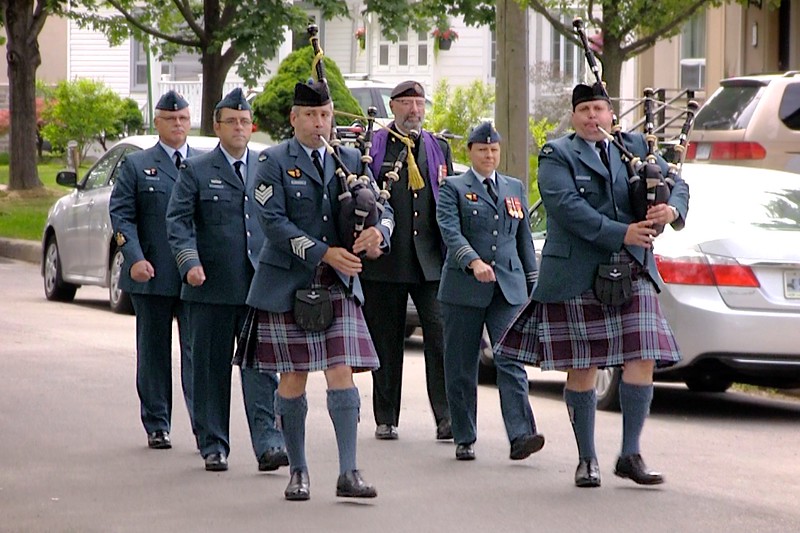 Ceremonies began with skirl of bagpipes, as representatives of 400 Squadron marched up the road and into the tree-lined park at Hearst Circle. Their earlier incarnation No. 10 (Army Cooperation) Squadron (the first RCAF auxiliary squadron) – later renumbered No. 110 (City of Toronto) Squadron –  was based at this airfield from 1934 until 1939 when it was called up to Ottawa. In February 1940, it became the first Canadian squadron sent overseas. 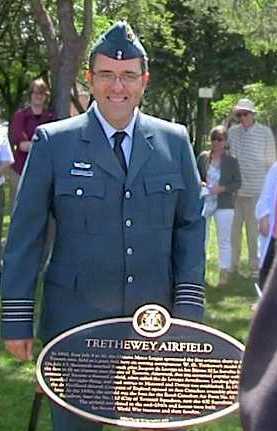 There’s nothing like bagpipes to stir the spirit. For me, the pipes set off a trip down memory lane.

The Squadron’s Honorary Colonel is Patrick Curtis, whose grandfather (Air Marshal W.A. Curtis) and father (Lt. Col. W.A. “Wilf” Curtis II) had distinguished careers in the RCAF. Wilf II served as commander of 400 Squadron from 1955 to 1957. He and his family were our neighbours in Armour Heights at the time, living half a block away.

At the reception following the ceremony I was introduced to Pat Curtis and confirmed that, Yes, it really was his older brother Wilf III whom I used to babysit as a teenager. What a small world it is! You can imagine we found lots of family history to talk about. 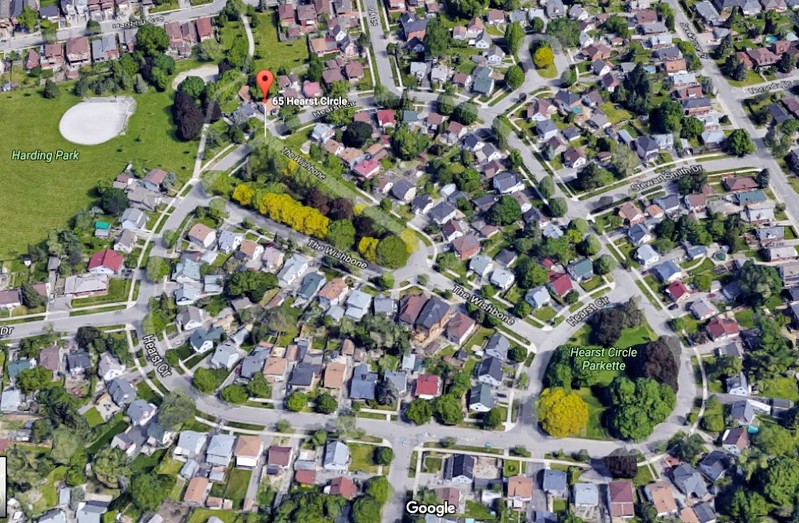 Reliving history was the order of the day. Madeleine McDowell, of the York Historical Society, caught our attention even before she went to the microphone, dressed for the occasion in her father’s work smock with DE HAVILLAND in bold red letters on the back. She reminded us that the parks around us – the Hearst Circle parks and Harding Park – lie directly on the line of the air strip used by de Havilland Moths so many years ago. 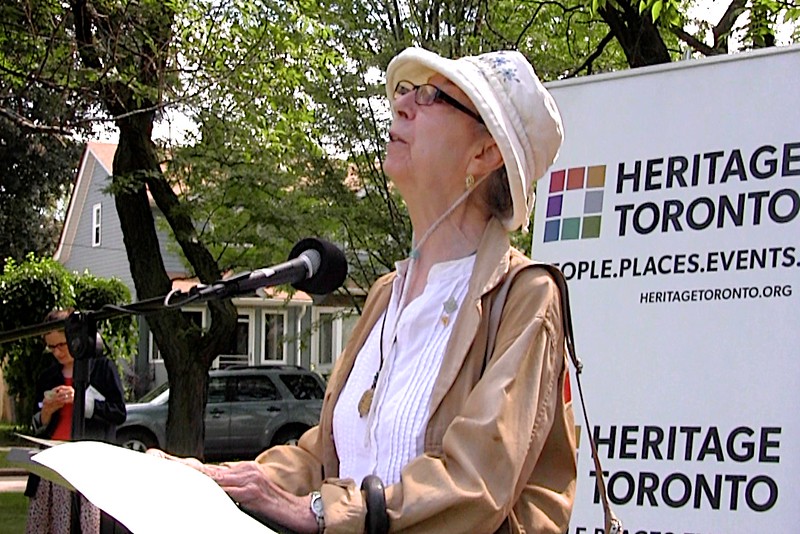 Madeleine raised her eyes with a faraway gaze as she evoked the memory of early aircraft taking off from the very land beneath our feet. We all looked up too, sharing her vision of open-cockpit biplanes gathering speed and lifting off the grassy field into the beckoning blue. (You can stir your own imagination by viewing Malcolm Auld’s short video of Cirrus Moths in Britain: https://www.youtube.com/watch?v=zCchhEaLZOo )

The vision stayed with me, and I kept wondering just how many Moths had passed through de Havilland’s facilities established in March 1928 at Trethewey Model Farm, Mount Dennis. A few days later, I turned to Malcolm Fillmore’s “DH60 File” and began analyzing. Here is what I came up with.

By my count, a total of 197 Moths were shipped to the Mount Dennis site before de Havilland Canada moved north to Downsview in September 1929. These Moths were built by de Havilland in England and shipped here for assembly between 30 March 1928 and 14 August 1929.

The numbers included 57 DH 60X Cirrus Moths, the last of which arrived at Mount Dennis on 14 September 1928. By then de Havilland had developed an engine of its own, and the DH Gipsy replaced the Cirrus engine. In the period from 3 October to 15 December 1928, 10 DH 60G Gipsy Moths equipped with the new engine reached Mount Dennis.

Cheers must have gone up in the assembly plant on 30 November 1928 when the prototype DH 60M metal-fuselage Moth was delivered, spelling victory for the Canadian campaign to make this design change from the wooden Moth. Like the DH 60G Gipsy Moths, the 60M models also featured Gipsy engines. In 1929, between 28 January and 14 August, a total of 130 DH 60M metal Moths arrived at Mount Dennis, many of which went for parts to upgrade earlier wooden Moths. (As a footnote here, Fred Hotson, in his book The de Havilland Canada Story, quotes the 1929 price of a DH 60M landplane as $4450 while the seaplane version sold for $6250. To put that in context, George Fuller tells me that a 1929 Model A Ford four-passenger Fordor Sedan sold for $625.)

Links with the Past 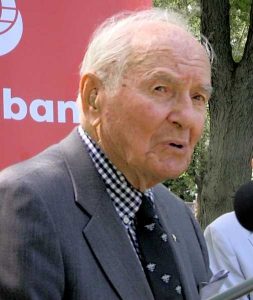 Of course all that calculating and research took place in the days following the July 15 ceremony, but I have to mention that a former president of de Havilland Canada, Russ Bannock, DSO, DFC and Bar, was a guest speaker at the plaque dedication.

Having earned a reputation as the RCAF’s leading night fighter pilot of World War II, he joined de Havilland Canada in 1946 – long after production of the family of DH 60 Moths had ended. He eventually became company president in 1976. I regret I did not have a chance to speak with him. 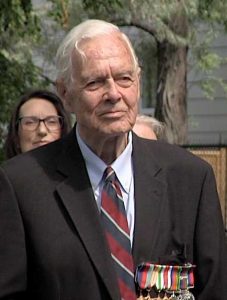 Jim O’Brian is another person I wish I had chatted with. His father, Air Commodore Geoffrey S. O’Brian, CBE, AFC, was an instructor with Aircraft Limited, a private company operating a flying school at this airfield in 1928-1929 with four Cirrus Moths.

G.S. O’Brian joined de Havilland Canada as sales manager in 1930. The fact that he also commanded No. 10 Squadron from 1932 to 1936 meant that he had very close ties to the former Trethewey property.

A Tip of the Hat 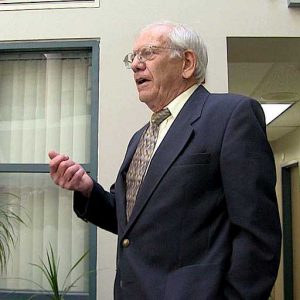 The whole project of a commemorative plaque owes its existence to the boundless energy of Robert Galway, long-time member of the Toronto Chapter of the Canadian Aviation Historical Society, and a golfing friend of my brother’s.

“Dr. Bob,” as he is known to me, has researched all the early Toronto airfields, and published a book on the subject. His most recent book, hot off the press, is The Trethewey Family and de Lesseps Airfield. If you’d like to have your own copy, see the links to the two latest books in the Sources and Resources list below.

In his closing remarks, Dr. Bob thanked Superintendent Ron Taverner for hosting the post-ceremony reception in the Atrium of No. 12 Division of the Toronto Police Service, 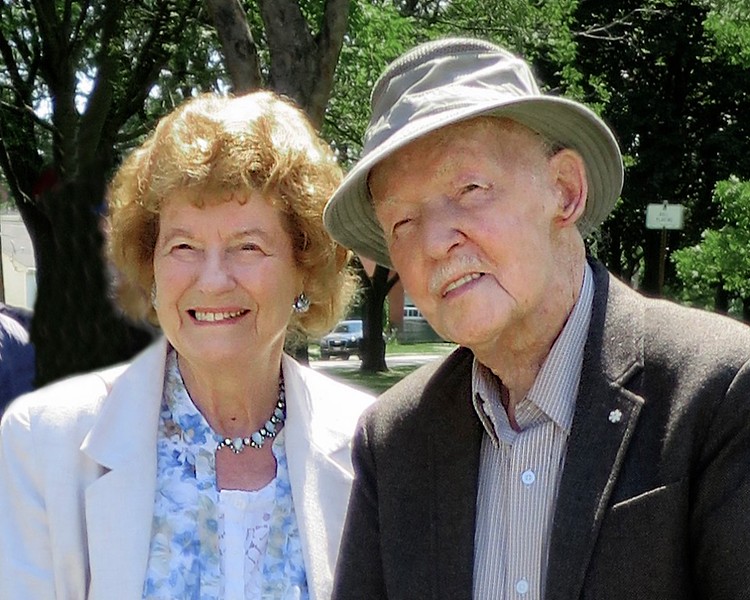 Finally, he expressed great pleasure at the presence of special guests Rosemary and Robert Bradford. Former director of what is now the Canada Aviation and Space Museum, Bob Bradford is widely recognized as one of Canada’s foremost aviation artists. He received a round of enthusiastic applause, as did Bob Galway in appreciation of all his hard work on this project, bringing the event to a fitting end.

Bertram, John – The link will take you to extensive photo coverage of the plaque dedication and unveiling: https://johnbertram.smugmug.com/Aviation/CAHSToronto/TretheweyAirfield/

Forsyth, Bruce – His post gives a full account of the day’s ceremony plus lots of background: http://militarybruce.com/torontos-near-forgotten-first-aerodrome-tretheweyde-lesseps-field-honoured-with-a-historical-plaque/

Galway, Robert – The Early Airfields of Toronto: From de Lesseps to de Havilland and Beyond. Self-published, 2016. http://www.blurb.ca/b/6804211-the-early-airfields-of-toronto