“What do you mean, Sheard Day? Never heard of it!”

Maybe you should have. It’s all because of Joseph Sheard that people in many parts of Canada have the first Monday in August as a civic holiday. 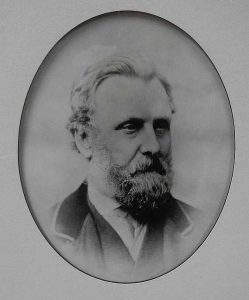 The story goes that around the time of Confederation – that was in 1867 – several years before he became Mayor of the city, Joseph Sheard proposed a motion to the Toronto city council that the first Monday in August be proclaimed a summer “day of recreation.” A perusal of The Globe shows that an August holiday was already popular in the 1860s. Many Ontario towns and cities had their own late-summer holiday, each one setting the exact date every year.

Despite the movable date, the public loved the idea of a day off work. Who doesn’t want a holiday in the heat of the summer? Cities emptied out, as holiday-makers headed for the countryside by train or steamer boat. There were picnics and boat races, amateur theatre shows, dances – entertainment for every taste. As evening fell, the citizens wended their way home, spirits uplifted by a day of recreation. 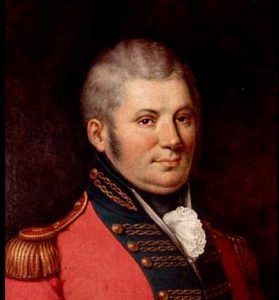 Fast forward a hundred years. In 1968, Toronto city council decided to bestow a name on their civic holiday. A Sheard family suggestion to call it “Joseph Sheard Day” went nowhere.

Instead, council chose the name Simcoe Day to honour John Graves Simcoe, the first lieutenant-governor of the British colony of Upper Canada (now the province of Ontario in Canada). It was Simcoe who set up a small garrison in 1793 at Fort York, at a site on Lake Ontario that became the City of Toronto in 1834.

That was just one year after Joseph Sheard had arrived in “muddy little York,” joining some 300,000 people who had already settled in Upper Canada. Born in England’s East Riding of Yorkshire, in the village of Hornsea, Sheard apprenticed at a young age to help his widowed mother. She had been left destitute with four children to raise when her husband, a veteran of the Peninsular War in Spain, died in 1813. His mother remarried and Sheard completed his apprenticeship as a joiner, qualifying as a journeyman. At age 19, he immigrated to Canada in 1833 and gradually made his way in the building trade in Toronto after surviving a bout of cholera.

Like many others in Upper Canada, Joseph Sheard resented the role of the privileged few – the “Family Compact” – and supported the rebellion of 1837 led by William Lyon Mackenzie. He soon had to make a critical choice. Two of the rebels, Samuel Lount and Peter Matthews, were captured and sentenced to death for treason. At the time, Sheard was employed as foreman by the man who did the jail work. On a cold wintry night, he and his fellow workers met secretly and swore never to build the hangman’s scaffold, no matter the consequences. That left their boss to construct the gallows! Lount and Matthews were hanged on 12 April 1838. Sheard and his friends had made a pact to support one another’s families “should the worst come,” but fortunately the threat of retaliation faded away. 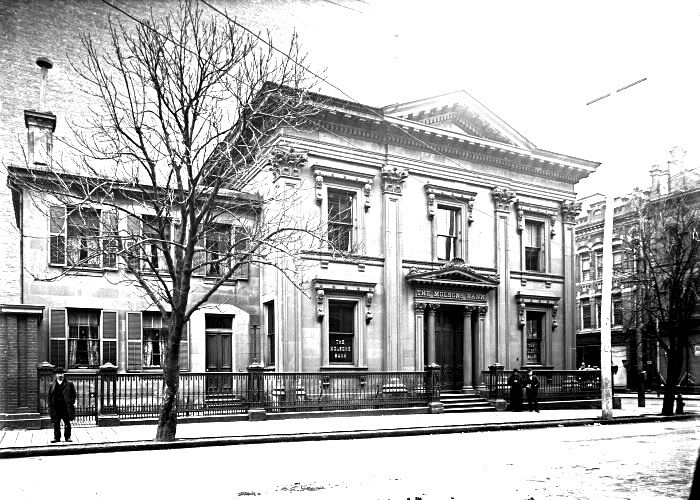 Cawthra House, silver gelatin print by unknown photographer, 1897, when occupied by the Molson’s Bank. At the corner of King Street West and Bay Street in Toronto’s financial district, the site is now home to the Bank of Nova Scotia. Toronto Public Library Digital Archive r-2138.

As the years went by, Sheard became a prominent architect in the burgeoning city of Toronto. His most famous building was the Cawthra mansion, on King Street West at Bay Street, built in 1852, and demolished in 1946. Few of the buildings he designed remain today. But Sheard also left his mark on later generations of architects. Among those who apprenticed in his practice was E.J. Lennox, architect of such Toronto landmarks as Casa Loma, the Old City Hall and the King Edward Hotel. Sheard’s expertise was recognized with his 1862 appointment to the commission studying financial problems plaguing construction of the first Parliament Buildings in Ottawa. Cost overruns had brought building to a standstill. Construction resumed after the commission reported in 1863, and Centre Block officially opened in 1866. Final cost of the East, West and Centre Blocks was four times higher than the original budget! 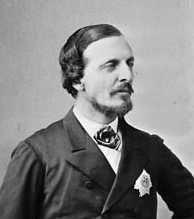 Around this time, Sheard withdrew from his architectural practice to concentrate on local politics, always one of his great interests. For 25 years, from 1851 to 1876, he served as a city alderman. In 1871 his fellow aldermen elected him as Toronto’s nineteenth mayor, noting his “independence of character, his consistency to principle [and] his devotion to the interests of the city.” They also lauded his courtesy and impartiality, and his willingness to help those in need. He was elected for a second term as mayor in 1872.

Though Sheard was highly respected in his time, his name is little known today. He would no doubt have approved of the decision to honour Simcoe. As mayor in 1872, when he welcomed Lord Dufferin to Toronto as Canada’s first Governor General, his speech praised Simcoe, who “claimed this community from the wilderness less than a century ago.”

So Simcoe Day it is, at least in Toronto! Enjoy your August long weekend, whether you call it Simcoe Day, Colonel By Day, Terry Fox Day, Regatta Day, or some other name. For my part, I’ll just wish everyone a Happy Sheard Day!

And add that Joseph Sheard was my ggg-grandfather.

Brochure for Dedication of the Sheard Parkette, McGill Street, Toronto.