Gander: Crossroads of the North Atlantic

Twenty years ago, 42 aircraft descended on Gander. Not by choice. The date was September 11, 2001.

An hour after the first plane crashed into the World Trade Center in New York, the U.S. Federal Aviation Administration shut down American air space.  All pilots halfway across the Atlantic Ocean en route to the United States that morning were diverted to airports on Canada’s east coast.

Residents of Gander and nearby communities welcomed thousands of passengers from the 38 commercial airliners and four military aircraft that landed at Gander airport on short notice.

“Come from Away,” the hit musical, immortalizes the Newfoundland warmth that greeted Gander’s 6,600 unexpected guests. If you were among them, there’s no need to retell the countless acts of kindness and compassion that offered comfort during those five dark days before aircraft were cleared to depart.

The choice of Gander as a diversion point for large airliners was no coincidence. The airport was uniquely equipped for the task by its role as a major military airfield during the Second World War. At the time, Gander airport was the largest in the world, and during the war years, it dispatched thousands of bombers across the North Atlantic for use by Allied forces in the defence of Europe. 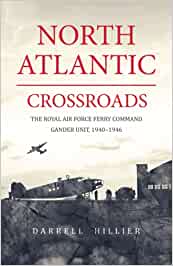 A recent book by Newfoundland aviation researcher Darrell Hillier, North Atlantic Crossroads, published in 2021, zeroes in on the wartime story of the Gander unit of the Royal Air Force (RAF) Ferry Command. But the book is more than a Ferry Command history, according to Frank Tibbo, an aviation historian living in Gander. He sees it as a “comprehensive record” from the first survey of a possible airport site in 1935 to Newfoundland’s retrieval of the airport from Canada in 1946.

Author Hillier dates his interest in aviation history to 1980 when he moved to Gander as a teenager and learned that he could visit the place where a Boeing B-17 Flying Fortress had crashed years earlier near the Trans-Canada Highway. He was hooked. He visited other crash sites around the airport, and eventually in other parts of the province. His research evolved to include air force operations during the Second World War at all the military airfields in Newfoundland and Labrador, especially the work of the RAF Ferry Command unit at Gander.

“There was something special about Ferry Command that drew me in,” Hillier confesses. “I discovered that the Gander unit went to great lengths to salvage downed aircraft, whether in whole or in part. The stories fascinated me, so about ten years ago I started writing my first draft of the book, concentrating on crashes and salvage work.”

More drafts followed as his perspective expanded to include the work of the RAF Gander unit, the overall mission of Ferry Command, the human-interest stories of the people involved, and the broad political, economic and military context.

Published in summer 2021, North Atlantic Crossroads is an eminently readable book that will appeal to anyone interested in Gander, military aviation, or Newfoundland and Labrador’s contribution to the Second World War. The 275-page book includes 50 photos, end notes and an index. It is available from Amazon and other book dealers.