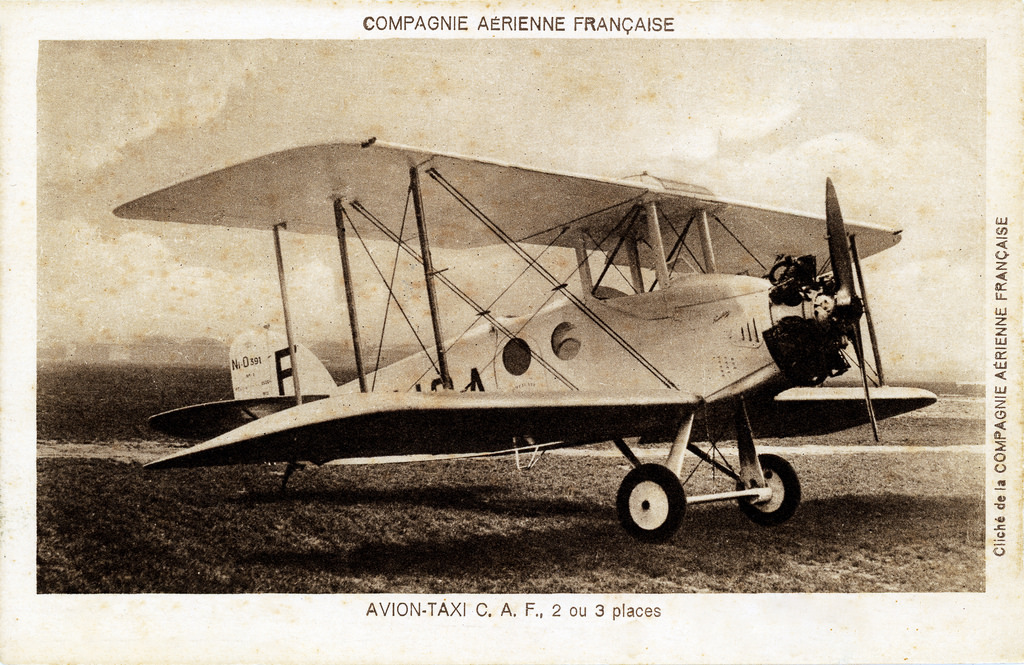 What a Sinking Feeling…

Aviation Inspector Stuart Graham could hardly believe it. The newly imported French biplane he had come to inspect at Pointe-aux-Trembles on the Island of Montréal was disappearing before his very eyes, sinking through the March ice into the St. Lawrence River. 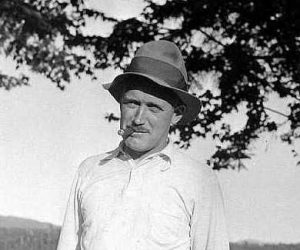 Nothing in his previous experience had prepared him for this. Not his time as a Royal Naval Air Service pilot in World War I patrolling Allied shipping lanes in flying boats and seaplanes. Not his wartime encounters with two enemy submarines, for which he was awarded the Air Force Cross. Not his work in 1919 and 1920 as Canada’s first bush pilot flying Curtiss HS-2Ls for the St. Maurice Forest Protective Association north of Trois-Rivières, Québec. And certainly not his months in the Canadian Vickers Aircraft Shops in Montréal or the Royal Canadian Air Force flying photo mapping surveys before his appointment in 1928 as District Inspector, Civil Aviation, in the RCAF Air Services Division. “There were only two of us covering all of Canada at that time,” he later recalled.

Hottest Day of the Month 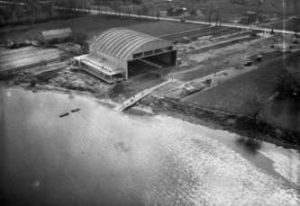 On Wednesday, 12 March 1930, Inspector Graham arrived at the imposing concrete hangar of the Compagnie aérienne franco-canadienne (CAFC) to assess whether the aircraft met Canadian government licensing standards. The French-built Nieuport-Delage (Ni-D) 391 CF-ALT (c/n 11) was already out on the ice, on skis and ready for flight.

Unfortunately, history would prove this to be the hottest day of the month, with a mean temperature of 2.8°C, according to historical climate data maintained by the Canadian government.

Equally unfortunately, the CAFC had a lot riding on this aircraft. After earlier unsuccessful bids, they had finally won an airmail contract from the Post Office Department. They had arranged to buy the Ni-D 391 from France specifically to support this work.

While waiting for the new plane to arrive, they leased a Travel Air BE-4000 – CF-ABI (c/n 1152) – from the Témiscouata Air Transport Company of Notre-Dame-du-Lac, Québec. On 29 December 1929, CF-ABI inaugurated their new weekly airmail route between Oskélanéo and Chibougamau, carrying 399 pounds of mail, 78 pounds of freight and one passenger over the 200 km distance. 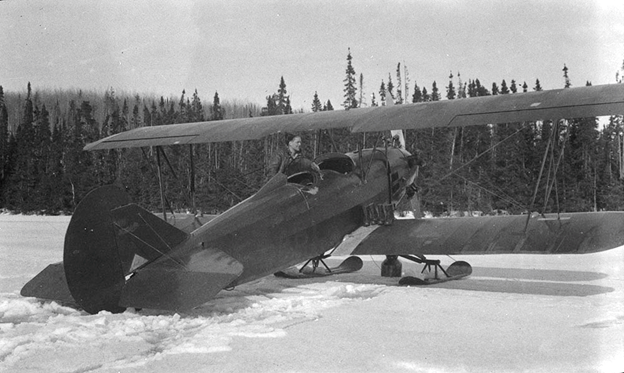 Now the pressure was really on the CAFC. They would have to return the Travel Air by 10 March 1930 – but their airmail contract was for four years. They needed the Ni-D in service. Immediately. The CAFC’s managing director Capt. M. J. Quédrue signed an urgent letter to Inspector Graham on 5 March 1930 promising to have the newly imported French aircraft assembled and ready for inspection the following Saturday or Sunday. But It would be the following Wednesday before the inspection was finally scheduled.

A Helluva Way to Break the Ice 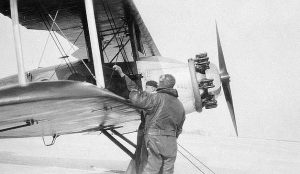 Pilot N. A. Duval and a CAFC air engineer check out the Nieuport-Delage 391. Photo: Library and Archives Canada C-033248.

Meanwhile the CAFC pilot – Napoléon Albert Duval of Contrecoeur, Québec, age 20, proud holder of pilot’s license No. 495 issued on 24 June 1929 – had his mind on the job at hand. He had already made one trial flight before Graham arrived on 12 March.

With the Inspector present, it was time for the official test. Duval began taxiing downstream on the frozen St. Lawrence so he could turn and take off into the 8-mile-an hour west wind.

Although earlier depth measurements had indicated the ice was strong, Mother Nature knew better. Before long, CF-ALT hit a weak spot, and gradually the ice gave way beneath the biplane until it was held up only by its lower wings. 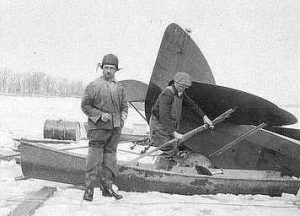 So much for official plans to inspect CF-ALT for its certificates of registration and airworthiness! Ever courteous, and apparently ever unflappable, Inspector Graham remained on hand, ready to lend practical expertise and moral support.

But there was nothing he or anyone else could do to prevent the inevitable. Even while company personnel were engaged in salvage efforts, the biplane continued to sink. At last, only the upper wings and the tail showed above the ice. As evening drew on, CAFC workers attached a number of empty 45-gallon gas drums to the aircraft in a desperate attempt to keep it afloat overnight.

Cold Weather to the Rescue 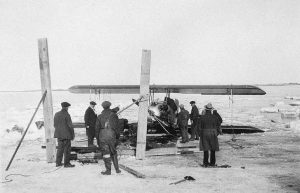 Luck was with the salvage workers, as Thursday brought a mean temperature of 0.0°C.  The CAFC quickly put a crew of 15 to 20 men to work cutting out the ice and shoring up the aircraft with planks. On Saturday 15 March, nearby farmers came with a team of workhorses, and hauled the aircraft ashore. The following Tuesday, the company advised Inspector Graham by letter that apart from repairing or replacing the broken propeller, all the airplane needed was a thorough drying and cleaning.

The ill-fated CF-ALT was the only Nieuport-Delage ever licensed in Canada – in fact the only Nieuport-Delage of any model to be Canadian-licensed. Manufactured by the Astra-Nieuport firm based in Issy-les-Moulineaux, France, the Ni-D 391 featured a single-bay open cockpit for the pilot and an enclosed cabin for two passengers. Its British-built Armstrong-Siddeley 7-cylinder Lynx IVc engine produced 200 hp at 1900 rpm, giving a maximum speed of 110 mph.

Evidently CF-ALT passed muster the second time around. Certificate of Registration No. 834 and the required Certificate of Airworthiness were sent to the company with a covering letter dated 8 April 1930. Ironically after all this trouble, there is no evidence that CF-ALT ever flew commercially in Canada.

Meanwhile the CAFC extended its lease on the Travel Air and proceeded with its airmail contract. Records show that the company hauled 1,854 pounds of mail and 3,500 pounds of freight between the northern Québec prospecting areas of Oskélanéo and Chibougamau, logging a total of 78 hours before the government abruptly cancelled the contract effective 1 September 1930. In line with standard Canadian practice, no compensation was offered to offset the company’s capital investment.

A few months later, the CAFC began gradually winding down their affairs. They had set up in Canada primarily to do aerial photography and mapping for the Québec government. With all the contracts completed for their major client, the company essentially ceased operations at the end of 1931. As for the Ni-D 391, it lingered in storage in the company’s hangar at Pointe-aux-Trembles for many months. On 27 May 1935, in a memo to the Superintendent of Air Regulations in Ottawa, Graham brought the story to a close: “We are advised that the above noted aircraft has now been returned to France.”

Thanks to Bob Bancroft and to Diane and John Wagner for reading the draft of this blog. Thanks also to George Fuller and Terry Judge for sharing information and advice on matters of aviation history. And a tip of the hat to Chris Hargreaves of the Canadian Aerophilatelic Society for encouraging me to pursue my research on this airmail contract.