Bachelor Lake Float Plane Base – Sprucing up the Cabins

Con and Barb Campbell arrived at Bachelor Lake, in the Abitibi region of Québec, in mid-August 1950 to manage the Gold Belt Air Service float plane base there. For the first few weeks, they worked from dawn to dusk getting the camp in running order, and settling into the routine of operating a base camp. Once things were under control, they set their sights on making improvements to the two cabins.

This is the fifth in a series of excerpts from Barbara’s journal, “Bachelor Lake Daze,” published here with the kind permission of Dr. Sandra Campbell and Con Campbell, Jr. To view all posts from “Bachelor Lake Daze,” click on the Gold Belt Air Service category below the main title at the top of the page.

A short bio of Barbara Van Orden Campbell can be found here: http://wp.me/P790K9-6J

Life had been hectic since our arrival at Bachelor Lake in mid-August 1950. As September drew to a close, we began to achieve something approaching law and order at the float plane base. Not ready to rest on our laurels, we decided to press on and spruce up the two cabins.

We moved everything from the rear of the main cabin into the front half. Then Con went to work with crowbar and axe to rip up that miserable log floor.  Beneath it he unearthed a dollar and sixty-seven cents in small change (it wasn’t much but it kept him working!), a compass that stubbornly pointed ENE, a set of keys, a family of field mice and a small mountain range of bottle caps and broken glass.

Piled out behind the Other Cabin was a quantity of groove and tongue boards left over from roofing the cabins.  These Con used to make the new floor, hammering and sawing as he traced the genealogy of the men who had built the cabin.  Of course none of the corners were square and had he put the floor in level, as he certainly intended to, it would have started at the bottom of the lowest log in the back wall and ended half way up the front wall. 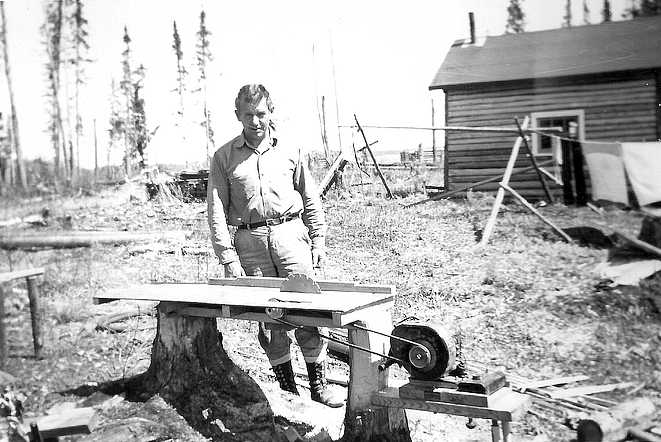 “How would you like a split-level house, Barb?” he asked suddenly one day. “And just what devious plan are you hatching?” I asked as if I didn’t know. “Well, if I put a step here in the middle of the room it would take up some of the slack in the floor,” he explained cryptically.

“Never mind your architectural innovations,” I said firmly. “Just put the floor in flat.  As long as it’s clean and I don’t sprain both ankles getting breakfast it doesn’t have to be level.  We’re not running a bowling alley!” “All right! All right! I was just asking,” he grumbled.

Back he went to the drawing board, so to speak. In the end, by putting heavy stringers across the back and lighter ones across the front he leveled things off pretty neatly.  Wall-to-wall broadloom could not have looked more luxurious to me than those fragrant, yellow boards.  Before they had a chance to get dirty we gave them several coats of paint and waxed them.

While Con was laboring at floor level, I was tottering around on boxes and oil drums with pans of soapy water, a scrub brush and a bottle of bleach removing the grime of what felt like centuries from the log walls.  The dirt came off in the same ratio as the skin from my hands.  It took nearly a week before the job was done but the effect was remarkable.  The clean logs were a lovely amber color and shone with a quiet luster under their coat of wax, as I kept reminding myself while my cracked and bleeding hands were healing.

The Other Cabin we fixed up as a bunk house for overnight guests.  Our own things came out and we moved the second set of bunks over from our cabin.  Con set up a small heating stove as the nights were cold now and the cabin was damp.  To Con’s chagrin I put curtains up at the window, so it was a snug hostelry for our transient visitors.  As all the pilots, and most of their passengers, had their own sleeping bags, bedding was not much of a problem.  The blankets that infested the place when we arrived were bundled, kicking and screaming, into a plane and out to the dry cleaners, returning an entirely different shade and many pounds lighter.

A Real Bed – At Last

After an overnight stay with us, Gold Belt pilot Bob Birkett inquired casually at breakfast as to what we did for sleeping accommodations ourselves.  Con replied with equal casualness that we slept on spare bunk mattresses on the floor.

“You’re kidding!” Bob said incredulously, coffee cup poised ‘twixt saucer and mouth. We assured him we weren’t tampering with the truth. “You mean you’ve been sleeping on the floor for over a month?” he asked. “Why didn’t you say something?”

“You didn’t ask us,” Con pointed out, “And anyhow Barb can’t stand heights.  Sleeping ‘way up on a bed gives her vertigo.”

Turning to me, Bob asked, “Is this true?” “No,” I said with feeling, “it’s certainly not true – and I can’t tell you how often I’ve dreamed what a wonderful place to sleep a bed would be.  We slept on the ground all summer before we came in to Bachelor Lake, you know.”

“God Almighty!” He smote his brow.  “There’ll be a bed on the next plane in!  Any particular period of furniture you’re collecting?” he asked.

“Now just take it easy for a minute, Bob,” Con broke in.  “If you send in a spring and mattress I’ll make the frame myself.  I’ve got an idea I want to try out – I have some birch logs drying out that will be just what I need.  Okay?”

“It’s okay with me,” he agreed.  “Well, I’ve got to hightail it for Chibougamau – maybe I can get two trips in today.  If I do, I’ll bring in a spring and mattress this afternoon.  Guess I’ll need some gas, Con, so if you’re ready to refuel, I’ll get going.”

Now that we knew Bob better, he had become one of our favorite people.  I was frightened to death of him at first – that eerie silence of his was quite unnerving, but he thawed considerably after he had been in to Bachelor a few times.  We found him to be friendly but reserved, with a boyish streak that cropped up at odd moments.  At one meal I served a freshly baked cake for dessert and was disappointed to see him carefully cut off the thick chocolate frosting and push it firmly aside.  He looked embarrassed and then explained sheepishly, “It’s the best part! That’s why I always save it till the last!”  Nodding in understanding I cut him another slice, and was never awed by him again. 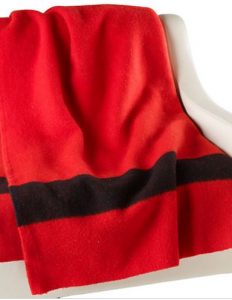 The spring and mattress were delivered as promised.  Con spent his spare time for several days making the bed frame, and when it was finished it a work of beauty. The four posts he made from matching birch logs with the bark peeled off, revealing the white wood beneath.  Some six inches in diameter, the head posts were about twelve inches taller than the foot posts, with the tops cut off at an angle.  The side and end boards were smooth, thick slabs of birch.  Con took great pains to fit the posts and the boards together neatly so that when he was finished, all the members dovetailed firmly. Our hand-made bed was as solid as Gibraltar and nearly as heavy and was a handsome piece of furniture.  After the new spring and mattress were in place I made up the bed with crackling clean linen, red Hudson’s Bay blankets, and a red-and-blue homespun spread.  Then I sat for a long time gazing at the finished product in sheer adoration.  A real honest-to-gosh bed!  The first time I found those two mangy curs BSE and PAA curled up in the middle of it they had good reason to renew their half-forgotten fear of brooms!

Now that we had the floor, the walls and the bed under control, Con began to glare at the front door and to kick it peevishly as he passed.  It was indeed unsightly and inadequate by more than a tattered scrap of tarpaper.  When it was closed, a cat could have been thrown either under it or over it.  Besides its flimsy construction, it was too low.  We often wondered if Gold Belt manager Leo Seguin felt he got more for his money by hiring his pilots by the yard.  Both Gordon and Bob were way over six feet, so that every time they walked through that door they hit themselves a clanger on the head.

A Door for Eternity 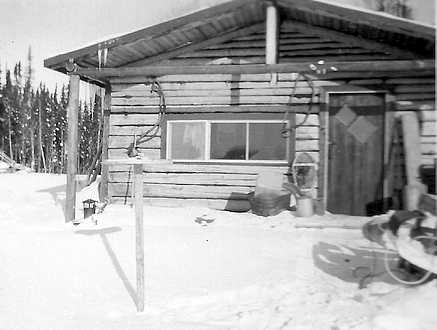 When Con built the new door he built it for Eternity.  It measured seven feet by four and a half, and was of three-layered construction.  On the outer layer the boards ran up and down, the in-between layer was cut diagonally and the inside one ran east and west.  Between each layer was a thickness of insulating material and the whole structure was bounded on the edge by strap steel.  He set in two small windows, jauntily, at an angle.  After the door was built, and while he was cutting the door frame to fit, I gave it a coat of fire engine red on the outside and painted the inside a virginal white.  We now had an impressive looking entrance to our cabin in the bush.

That red door shut with such a solid crash as to nearly bring down the cabin.  But we never had a pilot so tall as to bean himself after that, and we could finally luxuriate in the comfort of our clean and cozy cabin.

[End of this excerpt. Watch for the next one up soon!]