A special contribution from the tall tales 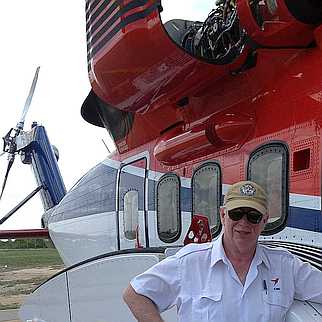 What’s the difference between a Flying Story and a Fairy Tale?

Fairy Tales start: “Once upon a time…”

When I was very young, probably 4 or 5, Fearless Ferguson and a friend of his showed up at our house in McWatters (now part of Rouyn-Noranda) to visit Mom and Dad and talk of Gold Belt Daze.

I was a sucker for a good flying story. Here’s the tale he told me that day.

“Well, Buddy (that was my nickname), one day I was coming back empty from Amos…didn’t have much fuel and it was getting dark, and Lake Osisko was fogged in!”

Nightfall at Rouyn-Noranda, showing Lac Osisko and the twin stacks of the Noranda mine. Photo: Ville de Rouyn-Noranda.

BUDDY:  Really, Mr. Ferguson! What did you do?

“Well, I could see the smoke from the stacks at the mine and the wind was from the west so I went downwind and set up for a glassy water approach.”

BUDDY:   What happened then, Mr. Ferguson?

“Well, Buddy, I slowed down as much as possible and did an approach into the fog…it was really dark.”

BUDDY:  Then what happened, Mr. Ferguson?

“Well Buddy, suddenly I saw water so I landed as short as possible!”

“Now that I was on the water, it was so dark and foggy I was afraid to try and find the shore…I thought I might run into rocks.”

“I did the safest thing. I tossed out the anchor and we slept in the plane! When I woke up the next morning, Buddy, do you know where I was?”

BUDDY:  NO, Mr. Ferguson, where were you?

“Well, Buddy, I had landed in the public swimming pool!”

BUDDY:  Really, Mr. Ferguson? What did you do then?

“Well, Buddy, we tied the tail of the Norseman to the diving board and I ran her up to full power and then Rolly cut the rope and I flew her out!”

“Well, that’s the end of the story. And now, Buddy, I think it is your bedtime!”

I still remember all the grown-ups at the table smiling as he told me his tale.

“Fearless” Ferguson was a pilot for Gold Belt Air Service of Rouyn-Noranda, in the Abitibi region of Québec, when Con Sr. and Barb Campbell were running the company’s refuelling base at Bachelor Lake. Click here to read Barb’s account of meeting the young pilot in 1950: https://wp.me/p790K9-Bp