A Passenger’s Prayer: “Talk to Me!”

Hands clenched around the control column, the pilot was tense. We were flying across Great Bear Lake in Canada’s Northwest Territories. Something sure was bugging him.

I was getting stressed out. Whatever was wrong, I could face it – if I knew what it was. But there was just a wall of silence.

The memories of that white-knuckle day flooded back at the last monthly brunch of COPA Flight 169. Maurice Baril, owner of a Tecnam P 92-S Echo, C-IDKV, was remarking that a pilot has to talk to the passengers, tell them what is going on. He got that right!

Picture yourself in the right seat of Northward Aviation’s Beaver CF-GQN – a DHC-2 Mk I built in 1950 – in the summer of 1967, heading west from Port Radium to Fort Franklin (now Deline). Over the grey and menacing open waters of Canada’s largest lake. Miles from shore. Lines of whitecaps crested the rolling waves below us. It was one heck of a windy day. If we had to make a forced landing, the plane would likely turn over. That lake is deep. And cold. Surface temperature in August: 3-5°C. Survival time? Ten, 15, 20 minutes? There was lots to worry about. 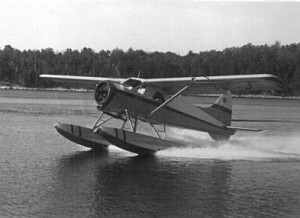 Decades later, Al Williams, the pilot, wrote about his time as a commercial pilot. Only when I read his book did I learn why he was tied up in knots that day. At Port Radium, he had a couple of young lads fill up the middle and rear tanks with 80/87 airplane gasoline while he met with the mine manager. The dark colour he spotted in the filter chamois made him suspicious about the fuel quality. For 270 km, all he could think of was engine failure and the inevitable consequences. You can read Al’s account of that day in Arctic and Bush Pilot, published in 1998. (Sadly, Al died a few years later. By then, GQN had found its way to Pacific Aircraft Salvage in Richmond, B.C.)

The lesson Al took from that experience was: “Always use up suspect fuel first.” My take-away lesson? As Maurice Baril said, “The pilot has to tell the passengers what is going on. How else will they know?” Thanks, Maurice!

Thanks to Maurice Baril and André Durocher of COPA Flight 169. Thanks also to T. R. Judge for help with registration details.