Who Really Flew the First Air Mail to Sept-Îles, Québec, in 1927? 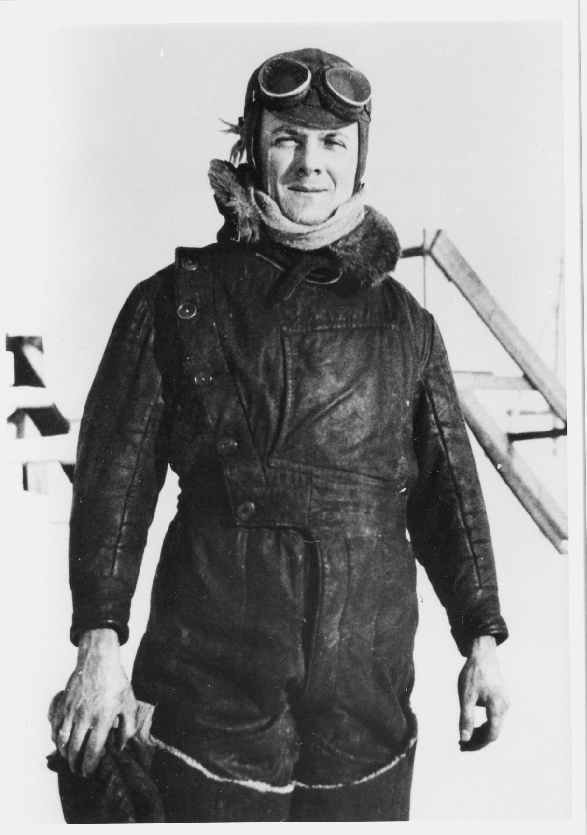 Roméo Vachon, shown here at Greenly Island in 1928, flew reporters to the site of the Bremen landing. He was chief pilot for Canadian Transcontinental Airways. Photo © Virtual Museum of Canada.

If you search the internet or published books on Canadian aviation history, most sources tell you that it was Roméo Vachon. They say the well-known French-Canadian aviator was the pilot who arrived in Sept-Îles, on the North Shore of the St. Lawrence River, on 25 December 1927, with the first load of mail ever delivered by air to this remote community.

But it’s not true. Even normally reliable sources can be wrong! In actual fact, the pilot was an Englishman, Charles Sutton.

Research within the stamp collecting community published more than 20 years ago in the Canadian Aerophilatelist clearly established Sutton’s role. Unfortunately, the findings of Derek Rance and the late Pierre Vachon, Roméo’s son, are not widely known.

Concrete proof of Sutton’s role is contained in records from the Québec-based company that had the North Shore air mail contract for 1927-1928, published here for the first time. These two pages list all the flights made by Canadian Transcontinental Airways Ltd. (CTAL) on the North Shore air mail run during the first winter of air mail service. Line 1 clearly names Sutton as pilot on that first flight.

In 1927, the Canadian Government decided to expedite mail delivery to isolated locations by using commercial air transportation. The Post Office Department lost no time awarding contracts. Among the first areas to benefit were the North Shore of the St. Lawrence, Pelee Island on Lake Erie, and the Magdalen Islands (les Îles-de-la-Madeleine) in the Gulf of the St. Lawrence.

On the North Shore, there was a crying need for the new air mail service.

During the open-water season, coastal steamers called regularly at the tiny villages, bringing mail and provisions. But when winter descended, ice on the river shut down navigation and isolated the North Shore from the outside world. Then the only way of getting mail in or out over the rugged and mountainous terrain was by dog sled. Even with the new air service, outgoing mail still had to be transported this way from the string of villages along the North Shore to Sept-Îles, the eastern terminus of the air route.

The North Shore contract was awarded to CTAL in November 1927. The company was required to provide once-a-week air service as far as Sept-Îles (often called Seven Islands in those days). Four times during the winter, the company’s aircraft would fly an additional leg of about 100 miles from Sept-Îles across the Gulf of the St. Lawrence to Port Menier on Anticosti Island, providing that community with its first-ever winter mail service.

The six-month contract had a total value of $32,000 and also covered weekly service from Moncton to the Magdalen Islands. 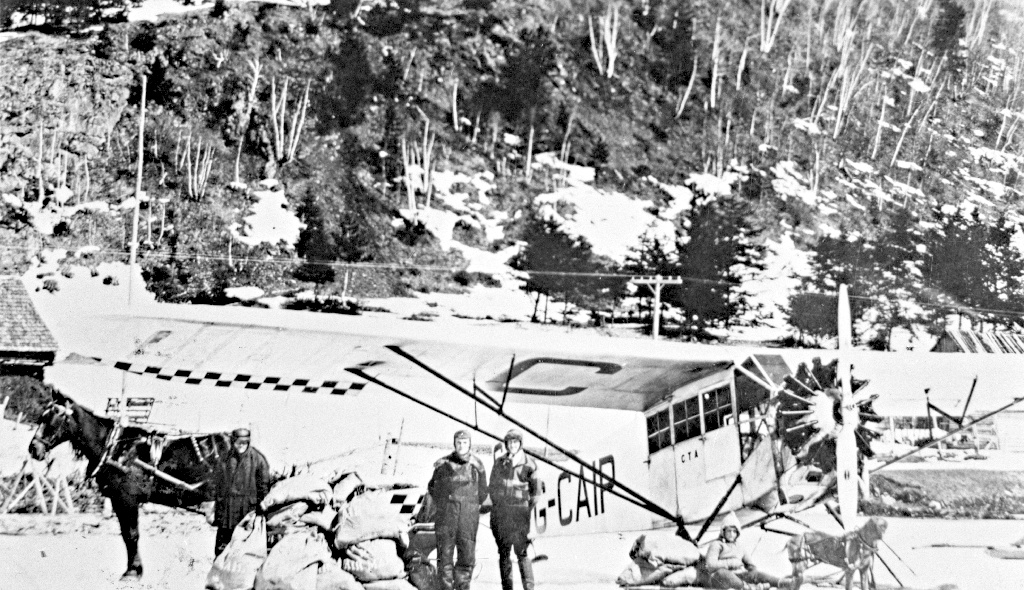 G-CAIP (FC-2W) at Canadian Transcontinental’s base at Lac Sainte-Agnès. The Fairchild photo shows mail hauled to the aircraft by horse, while on the right a dog sled is posed as if to start on a delivery run. Photo: Ingenium Canada, Ken Molson Collection, KM-07008-S_1791.

From Fact to Fable

How did the wrong version of the story gain such currency? A couple of innocent errors seem to be to blame.

First, Frank Ellis, historian of Canada’s early aviation heritage, credits Vachon as the pilot in his reference to this event. Ellis’ book, Canada’s Flying Heritage, was published in 1954, the year Vachon died. One could assume that Ellis never had a chance to discuss the 1927 flight with Vachon in person, and that he simply did not know about Sutton’s role. Sutton had died many years earlier in a crash during a 1930 air race in Toronto.

Ellis tells the same story in his 1959 book In Canadian Skies, and repeats it in his 1969 survey article for the Canadian Geographical Journal, “They Opened the North by Air.”

Second, Georgette Vachon, Roméo’s spouse, also features her husband as the Christmas Day pilot in her 1974 book Goggles, Helmets and Airmail Stamps. Pierre Vachon notes that his mother could not have had first-hand knowledge of the event. During the winter of 1927-1928, he reports, she was staying with family at Sainte-Marie-de-Beauce, busily looking after twin one-year-old daughters. Writing of something that had happened nearly 50 years earlier, she may well have referred to the Ellis book to check her “facts.” (See Hargreaves 1998.)

Interestingly, the same error has crept into a prime reference book used by collectors of air mail stamps and flown “covers” (envelopes).

Chris Hargreaves, editor of the Canadian Aerophilatelist, offered the following comment after reading an early draft of this post: “I have checked back in some early air mail catalogues, and the Third edition (1950) and Fourth edition (1970) of the American Air Mail Catalogue both state that Sutton was the pilot for the first North Shore Air Mail flight. The listing is changed in the Fifth Edition (1981) which states that Roméo Vachon made the flight, but gives no explanation for the change!”

The Facts as Reported by the Press

Various news articles from 1927 paint a picture that supports the research by Rance and Vachon. 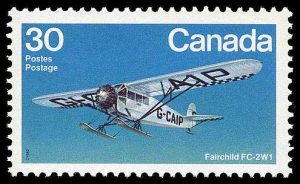 On Friday, 16 December, as reported in the Montreal Gazette of 17 December, Charles Sutton completed an acceptance flight of CTAL’s brand-new aircraft at the Fairchild factory in Long Island, New York.

On 19 December, with company co-founder and general manager Dr. Louis Cuisinier as a passenger, Sutton flew the Fairchild to the company’s operating base at Lac Nairne north of La Malbaie.* As the aircraft passed over the city of Québec, they dropped a sack of mail containing 150-200 letters. The French-language daily Le Soleil, Québec, reported these details on 22 December.

*This base was often referred to as “Murray Bay” (as well as La Malbaie), but was in fact located some 12 miles (18 km) farther north on a freshwater lake, Lac Nairne (formerly also called Lac Sainte-Agnès).

CTAL’s new Fairchild FC-2W (construction number 48) received its certificate of registration (No. 332) as G-CAIP from the Controller of Civil Aviation on 21 December 1927. A single-engine cabin monoplane, it was licensed as a commercial aircraft, approved for daytime operation at an all-up weight of 4600 pounds.

The French-language paper l’Action Catholique of 26 December reported that G-CAIP left Lac Sainte-Agnès near La Malbaie at 10:15 a.m. and dropped mail at six unspecified places before reaching Sept-Îles at 2:15 p.m. Dr. Cuisinier was a passenger on this flight, the paper stated.

A Canadian Press (CP) item carried by the Winnipeg Tribune of 27 December reported mail drops at North Shore villages and the arrival of the aircraft at Clarke City (now part of Sept-Îles) with nearly 200 pounds of mail on board, including letters, parcels and newspapers. “The plane, piloted by Captain Charles Sutton, came from La Malbaie and arrived shortly before noon. Much mail had been dropped by parachute at other places on the north shore which otherwise would not have their mail until well on in January.” 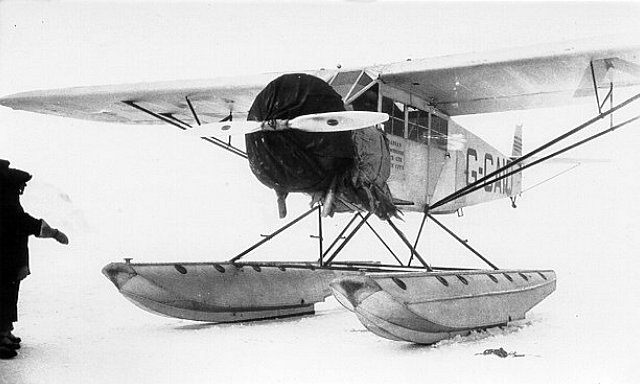 A sister ship of G-CAIP, also owned by CTAL, G-CAIQ was also an FC-2W (construction number 28). She had the same experimental arrangement of a ski-like base added to the float. Problems with the undercarriage shock absorbers doomed the experiment. As the late Patrick Campbell explained in the March 2000 issue of the Canadian Aerophilatelist, “floats need to be ‘solid’ to penetrate the water, while skis need ‘springing’.” Photo: CASM 2204_640.

The CP report also said that the aircraft, equipped with the new ski-floats, had landed on snow at Clarke City, where CTAL was building an airplane base, and that Sutton carried several sacks of mail on the return journey.

The article wrapped up with the statement: “Yesterday Captain Sutton took his machine back to Malbaie.”  Given the dateline of “Seven Islands, Que., Dec. 27,” this indicates his departure on 26 December.

However, the company’s 1927-1928 winter flying season report (see below) gives the date for Sutton’s return to Lac Nairne as 27 December. At least ONE discrepancy remains unresolved.

During the winter of 1927-1928, CTAL flew 23 trips on the North Shore mail contract, including four trips to Anticosti. The service started on 25 December 1927, while the last flight of the season – to Anticosti – took place 3 April 1928. The company carried a total of 15,356 pounds of mail eastbound and 1,071 pounds westbound.

The names of three pilots appear in the report on 1927-1928 North Shore operations: Sutton, Vachon and Schiller. Sutton left the service of CTAL soon after the first mail flight to Sept-Îles, and by February 1928, according to Pierre Vachon’s short biography of him, was flying for Patricia Airways in the Red Lake area of Northwestern Ontario. C.A. “Duke” Schiller joined CTAL in late 1927 or early 1928, and flew seven of the first season’s North Shore mail flights. But most of the North Shore flying that season was done by Roméo Vachon – 15 out of the 23 trips show Vachon as pilot.

This information is available because many company documents were saved by Canadian Airways Limited (CAL) when they absorbed CTAL under a series of amalgamations completed in 1931. Researchers are fortunate that CAL appreciated the value of good records and that the Richardson family, the primary investors in CAL, ensured their files would be preserved at the Manitoba Archives. 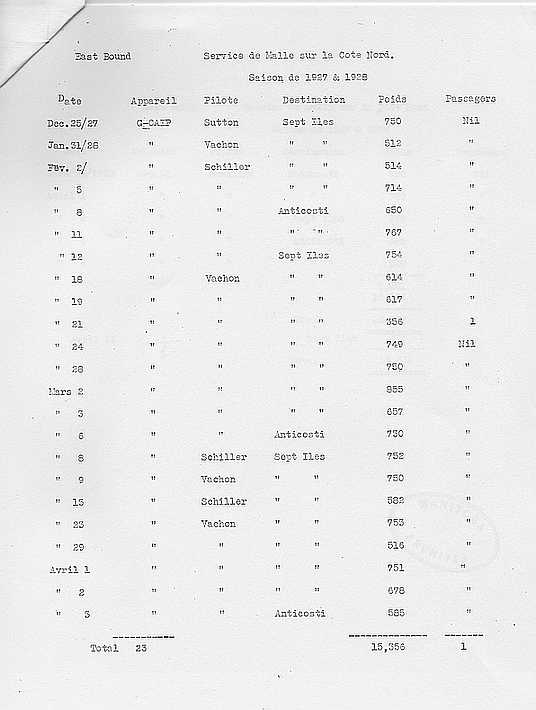 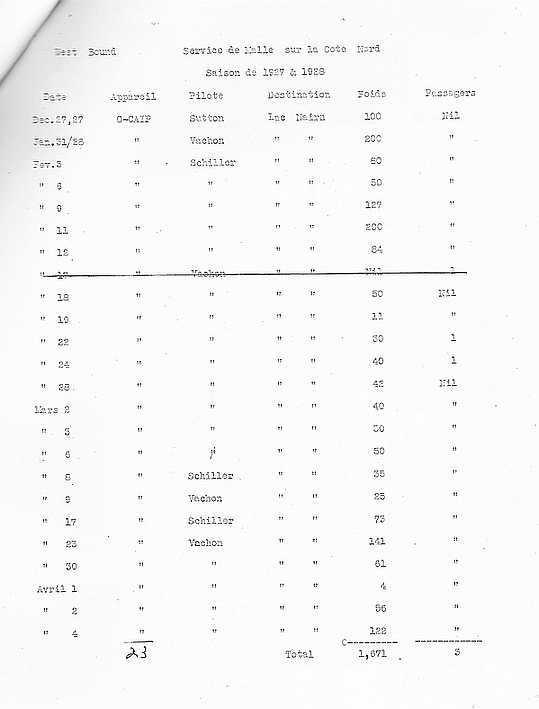 Aviation Story of the Year – The Bremen

Luckily the mail season was over in early April 1928. CTAL soon became heavily involved in “rescuing” the crew of the Bremen.

This German-built Junkers W-33 all-metal aircraft made headlines as the first airplane to cross the Atlantic non-stop.from east to west. Like much of the world, CTAL was gripped by the plight of its three-man crew stranded in the Strait of Belle Isle on Greenly Island, Québec, after they seriously damaged their aircraft while landing on 13 April 1928.

CTAL sent two aircraft to the scene. Schiller (with G-CAIQ, an FC-2W purchased by CTAL in January 1928 at a cost of $23,775) and his passenger Dr. Cuisinier were the first to reach the Bremen, arriving on 15 April. Two days later, Vachon arrived in G-CAIP with a load of Canadian and American press and newsreel reporters.

Journalists flock around aircraft at the CTAL base at Lac Sainte-Agnès. Up to 12 visiting airplanes parked on the frozen lake which served as headquarters in April 1928 for the Bremen “rescue.” Photo © Virtual Museum of Canada.

The CTAL base at Lac Sainte-Agnès became a hive of activity, hosting 12 visiting airplanes at various times during the last two weeks of April, some on wheels and some on skis. For more on this world-headline story of 1928, see Fred Hotson’s authoritative book, The Bremen.

What’s My Interest in All This? 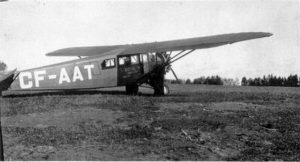 The Fairchild FC-71 CF-AAT (construction number 610) was acquired by CTAL in February 1929. It officially became part of the fleet of CAL in 1931.

My uncle, Howard Watt, was one of CTAL’s air mail pilots. He joined the company in February 1929, and immediately started on the North Shore and Anticosti service. The aircraft he flew most often on that route in 1929 was CF-AAT, an FC 71 acquired by CTAL in February 1929 at a cost of some $17,600 without motor. (They installed a motor purchased in 1928.)

Watt made the same number of return trips (23) between 3 February and 16 April 1929 as CTAL had made in the entire previous season. In March and April alone that year he flew 10,160 miles, carried 11,864 pounds of mail, and was in the air for 97 hours, 30 minutes. He was reassigned in May to the St. Lawrence service which connected at Rimouski with ocean liners crossing to and from Britain. But that’s a story for another day.

Thanks to Chris Hargreaves and Ian Macdonald for reading drafts of this post and sharing comments. The author, as always, is solely responsible for any errors of fact or interpretation. Please send a comment if you spot a problem so it can be fixed!